Got no complaints about Complaints*! 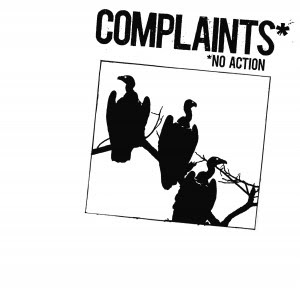 A sad development I started to notice in the middle-to-late 2000s was the decline of the great punk rock record label. You know what I'm talking about. There were certain labels, and you knew that every single thing they put out was gonna rule. You could take it to the bank. You always knew what you were getting, too: straight-up punk rock in the classic style. In a punk scene that was becoming increasingly infiltrated by hipsterism and "modernization", you could count on these labels to steer clear of such nonsense. Call me a genre geek if you want, but I like my punk music to be steeped in the tradition of The Ramones and Thunders and Iggy and The Clash.
Flash forward to the year 2011. The great punk rock record label may be a dying breed, but the ones that remain are freaking awesome. If Modern Action Records takes me back to the day when labels like Pelado and Radio Records reigned supreme, there's a good reason for that. Modern Action rose out of the ashes of Radio Records, and lately the label's been on a roll! Two of my top ten LPs of 2011 were Modern Action issues, and the seven-inches have been just as good. The latest is from San Francisco punk rock supergroup
Complaints*. The band features members of the Swingin' Utters, Lowdowns, Radio Reelers, and Western Addiction and plays good old-fashioned high energy punk rock n' roll. If I say this is a "classic Radio/Modern Action" type of release, you don't have to guess what I mean. Do you like The Stitches? Do you like The Bodies? Then you'll like Complaints*! *No Action is their fourth seven-inch, and it contains six short, to-the-point songs full of rockin' guitar leads and sing-along choruses. There are no surprises here and no attempts at changing the playbook. This is tried-and-true punk rock, and it's damn good! "I'm a Fool" and "Outcast", the standout tracks here, ride that fine line between '77 style and early '80s American punk, rifling out catchy high-powered tuneage at an accelerated pace. A concluding cover of "Cranked Up Really High" reminds you where these guys are coming from - as if you didn't already know!!!

One of the best EPs of the year!