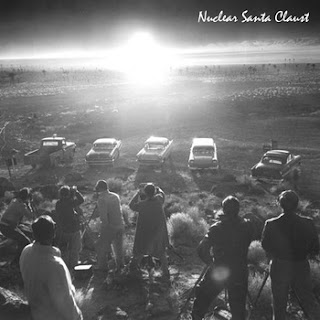 You may have guessed that Nuclear Santa Claust is not a wholesome group of Christmas carolers. Far from it! Imagine instead The Pagans and Screamers massacring each other in a knife fight and coming back as zombies to play Ramones songs under the lights of Armageddon. Most of the time you can tell when a "new" band is trying to play an old style, but that is not the case with this Brooklyn-by-the-way of Cleveland punk rock trio. NSC do not sound like they're from this time. Hell, they don't sound like they're from this planet! On top of that, they're just freakin' great! Remember when punk music was threatening? "Bikini Island" will blow your head clean off! My forthcoming album of the year selection may be shrouded in secrecy, but EP of the year is a stone cold mortal lock for NSC's self-titled debut. If you're a Killed by Death fanatic or a lover of early American punk, you'll want this record under your tree this Christmas!

Email ThisBlogThis!Share to TwitterShare to FacebookShare to Pinterest
Labels: '77 Punk, Killed By Death