Dany Laj & The Looks - "You Should Know" 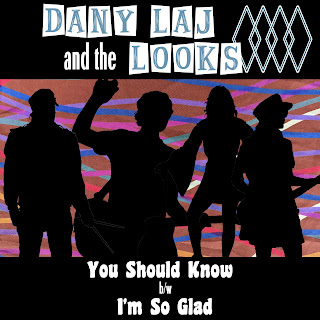 Installments in the I-94 Recordings "Detroit covers B-sides" 7" series have been arriving regularly and impressively. Release #7 in the series comes from some great friends to this blog — Dany Laj & The Looks. I'm always excited about new music from Dany and Jeanette. "You Should Know" and "I'm So Glad" are their first new tracks in nearly a year and a half. Back when Ten Easy Pieces came out, I actually thought the Flyers had a Cup-contending team (take whatever time you need to cease laughing). Man, things can sure change in a hurry! But one thing that will never change is being able to rely on Dany Laj & The Looks to deliver the goods. Dany and Jeanette recorded this release with pals Anna and Mike Mernieks-Duffield. That makes this particular iteration of the band a collaboration of two couples, and you can feel that dynamic in the warmth of the title track.
"You Should Know" is one of the most traditional rock and roll songs that Dany Laj & The Looks have ever done. It's a very simple song, yet it's executed wonderfully. Doo wop and girl group influences are front and center, and I'm also catching serious Buddy Holly vibes. Fine details such as the backing vocals and twangy guitar tone are immediately pleasing to the ear. But ultimately this song works because of its genuine sentiment and timeless melodies. What a catchy tune! It seems redundant to say that this is a terrific little pop song when this band is all about terrific pop songs. But I think you'll understand what I mean. Drop the needle on this track, and you'll be transported to the late '50s or early '60s. For the B-side, the Laj time machine stops off in 1967. The Detroit cover is essentially a cover of a cover. "I'm So Glad" was originally written and recorded by Delta bluesman Skip James in 1931. Detroit's The Scot Richard Case had a regional hit in '67 with a psychedelic rock version of the song. That recording was the inspiration for the B-side of this very record. Laj & The Looks definitely put their own twist on the song. But if I didn't know any better, I would think this track was actually recorded in the late '60s. It sounds that authentic to they heyday of psych rock. I'm usually very, very "meh" about the psych thing, but I can't deny that I'm impressed with this take on "I'm So Glad." It totally rocks, and the musicianship is out of this world.
Most people have their story about the first fun thing they did when lockdown ended. Dany Laj and Jeanette Dowling hung out with a couple of dear friends and eventually had them come down to make a record in the middle of a May heatwave. And now we can all enjoy the fruits of those sessions! "You Should Know" is available now from the I-94 Recordings web site. As usual with this series, there are many different sleeve variations and vinyl colors to choose from. Quite a few are already sold out, so hop on over to the site and check out the tantalizing options that still remain. And look for Dany Laj & The Looks to be touring everywhere in 2023!
-L.R.
https://danylaj.bandcamp.com/album/you-should-know-im-so-glad
https://www.instagram.com/danylajandthelooks/
https://www.facebook.com/danylaj/
https://i-94recordings.com/collections/frontpage/products/dany-laj-the-looks-you-should-know-7-vinyl-single-i-94-019
https://open.spotify.com/artist/5P76mSOqbsmjpkw5GENs9J
https://www.facebook.com/I-94-Recordings-113204123938004
Posted by Lord Rutledge at 7:15 AM

Email ThisBlogThis!Share to TwitterShare to FacebookShare to Pinterest
Labels: Dany Laj and The Looks, I-94 Recordings, Power Pop