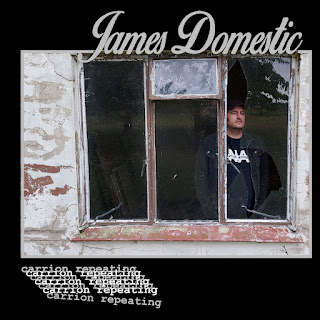 With today being a holiday here in the U.S.A., I am seizing the opportunity to write about an album I've been enjoying for several weeks now. Carrion Repeating, the new full-length recording from James Domestic, is described as "post punk pop music for weirdos." Domestic, well-known for his screaming brilliance in a multitude of teeth-smashing hardcore punk bands, has taken a very different route with this solo endeavor. You could say that Carrion Repeating doesn't quite fit with the music I usually review. But that's because it doesn't quite fit with any other music, period. It's in a category of its own.
As I try and pinpoint what makes this album so appealing to me (beyond the obvious uniqueness and creativity), I keep coming back to one thing. Carrion Repeating is not just a musical creation with the feel of a work of literature -- it's a musical creation that is a work of literature. Lyrically, these 11 tracks read like the  most fascinating and wonderfully disturbing diary entries you could ever hope to come across. Yet the music is never an afterthought. Although Domestic speaks most of the lyrics, this isn't a spoken word album. The music for each track seems meticulously crafted to match the tone of the vocals and lyrics (or is it the other way around?). Musical influences range from post-punk to dub to new wave pop to reggae to krautrock to soul to Brit-pop, yet the greatest influence is the twisted mind of James Domestic. He has created something rare in this day and age: a true album as opposed to a mere collection of songs.
In the hands of a lesser artist, this mish-mash of musical styles might come off disjointed or ill-conceived. But Domestic pulls it off splendidly, crafting weird songs that are genuinely enjoyable to listen to. The musings, observations, stories, and ravings which comprise this album create a bleak but bang-on picture of human existence: we are pitiful creatures living out disappointing, pointless lives which we are almost entirely powerless to change. "Are you a right fucker or just a fuckee?" is about as good of an opening line as you'll ever hear on a record and certainly the perfect tone-setter for this one. By turns humorous, angry, and matter-of-fact, Domestic's delivery of these songs is what really makes this album. Whether he's passing judgement on joyless tourists, lashing out at soulless bean-counters and cold-hearted exes, or painting a vivid metaphor out of human viscera, he does so with a unique and strangely likeable style. If you only know of James Domestic from the various bands he fronts, you may be surprised by what you hear. One of the year's finest LPs!
-L.R.
https://kibourecords.bandcamp.com/album/carrion-repeating
https://kibourecords.bigcartel.com/product/james-domestic-carrion-repeating-lp-pre-order
https://tnsrecords.bandcamp.com/album/carrion-repeating
https://www.tnsrecords.co.uk/shop/james-domestic-carrion-repeating/
https://www.facebook.com/kibourecords/
https://amokrecords1.bandcamp.com/album/carrion-repeating
https://amokrecords.bigcartel.com/product/james-domestic-carrion-repeating
https://jamesdomestic.com/
https://www.facebook.com/jamesdomesticscott/
Posted by Lord Rutledge at 11:37 AM