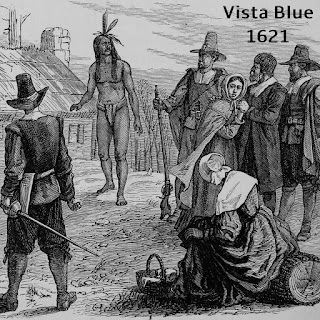 It's Thanksgiving here in the good old U.S.A., and this year Vista Blue has released new music in honor of the holiday. There are literally thousands of Christmas songs, but how many Thanksgiving songs do you know of? Not many, right? Well Vista Blue is gonna fix that for us! 1621, a free download over at Vista Blue's Bandcamp, is essentially a pop/punk symphony in three movements. It's based on the historical first Thanksgiving in Plymouth, Massachusetts (which residents of Virginia will claim was at best the second Thanksgiving, but let's not get into that!). Basically this sounds like any other Vista Blue release, which is a very good thing indeed. "They Stole Our Corn" is a song I would have loved just as much when I was 7 as I do now at 47. It would have fit perfectly on the band's recent EP of kid-friendly songs. You can't really tell the tale of the first Thanksgiving without acknowledging that the natives were robbed! "Plymouth Rock!" is an upbeat instrumental that leads into "Massasoit Crashed the Party" - a clever and impossibly catchy rendering of the Thanksgiving origin story. That chorus could very well be stuck in my head until next Thanksgiving!

If you've never heard of a band doing a Thanksgiving-themed release before, leave it to Vista Blue to be the first! Listening to 1621 is about to become an annual Thanksgiving tradition of mine - along with such things as rooting against the Cowboys and breaking out my Christmas beers for the season. And if you don't share my immense enthusiasm for Thanksgiving songs, stay tuned for Vista Blue's new Christmas EP releasing tonight!