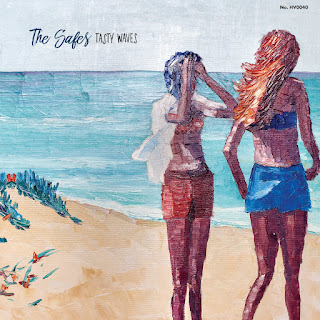 Having been one of America's great rock n' roll treasures since the early 2000s, The Safes are one of those bands you can always count on. There is no such thing as a bad Safes record, and the band's rep as a live powerhouse has been hard-earned and well deserved. This is one of the few bands I can name that has remained in peak form throughout each of the last two decades. And so with the recent release of The Safes' fourth album Tasty Waves on Hidden Volume Records, I braced myself to be wowed. I was not let down.

The Brothers O'Malley - Frankie and Patrick- have been constants in The Safes lineup since day one. The current incarnation of the band is rounded out by Dex Fontaine (drums) and Curt Schmelz (bass). While the band still occupies that general space where garage rock and power pop intersect, Tasty Waves definitely continues the '60s-inspired songwriting direction of 2014's outstanding Record Heat. And here's what I love about this band: while the influence of the Beatles, Beach Boys, Kinks, etc. is all over Tasty Waves, this is not even close to a "revivalist" record. It's modern-day garage pop with classic inspirations.

While The Safes are particularly known for their high energy live shows and guitar-heavy recordings, it's really the songwriting that steals the show on Tasty Waves. Frankie O'Malley wrote nine of the ten tracks and co-wrote the other with his brother Patrick. With this album, I've really taken notice of his skill as a lyricist. His wordplay is clever and often highly acidic/satirical. In other spots ("Crystal Ball", "Mind Of Its Own"), he comes off genuinely reflective. And "Streets and Sanitation" is some of the most compelling lyrical poetry I've come across in a while. While the melodies are strong enough to make even casual listening enjoyable, there's a lot to be gained from sitting down with the lyrics and digging deep into these songs. I don't think there could be a more spot-on lyrical couplet for 2017 than "I'm the guy whose eyes are not glued to his phone/And I'm so glad to know that I'm not alone".

With this particular set of songs, we get a Safes album that feels quite different from its predecessors. I'm not sure I want to use the dreaded "mature" description, but the absence of any obvious full-throttle rockers really emphasizes craft over crackle. Of course there's more than enough punch in the band's attack, and the songs remain lean at a total running time of 22 minutes. But standout tracks like "Hometown", "Crystal Ball", and "Nobody Cares Anymore" are true triumphs of skillfully woven melodies and highly creative songwriting. I'm especially impressed with the subtle touches that bring timeless '60s pop into the modern age. Front to back, The Safes have never delivered a better collection of songs. And the album just sounds amazing - the band working with producer Brian Deck to achieve a warm and wonderfully rich fidelity. Tasty Waves, like everything else The Safes have done, is an essential purchase.