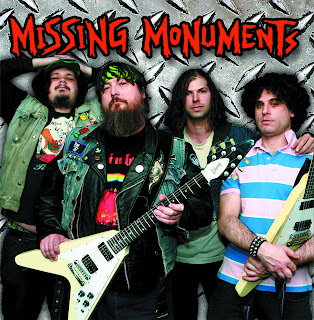 And now the album of the year conversation gets really complicated. It has truly been a blockbuster summer for LPs, and the self-titled effort from New Orleans foursome Missing Monuments just might be the crown jewel. Out this week on Dirtnap Records, this follow-up to 2011's excellent debut Painted White was probably my most highly anticipated release of this year. Yet somehow, the album is even better than I thought it would be!

Missing Monuments is precisely what I've been craving: a red hot rock and roll record combining power pop hooks with arena rock guitar shredding. For my money, Louie Bankston is the best songwriter out there. And clearly the list of bands on his resume (Royal Pendletons, Persuaders, Bad Times, Exploding Hearts, Kajun SS, Loose Diamonds, Black Rose Band) is beyond impressive. But Missing Monuments just might prove to be his best band yet. Formed four years ago by Louie and his lead guitarist pal Julien Fried, Missing Monuments really gelled as a unit when Benny Divine (Wizzard Sleeve) joined on bass in 2011. The difference in the band really shows in this new record. Compared to Painted White, the album rocks harder and sounds more like the work of a true band firing on all cylinders. And from a production standpoint, this record sounds totally amazing.

While a lot of reviewers like to lump Missing Monuments in the "garage/power pop" category, that's really an oversimplification of what this band is about. I don't think there's another group out there that sounds quite like Missing Monuments. These guys have made a gritty, soulful rock n' roll record with a uniquely southern/Cajun flavor. I can name a number of Louie songs that are among my favorites of this or any era. But I don't think he's ever written a better collection of songs than this one. There's not a sub-par track on the whole album. Songs like the big statement opener "Answer The Call" and the scintillating "Crash Landing" (Southern rock meets the Dead Boys?) really bring the heat, while "Super Hero" is the latest in a long line of "classic" Louie pop gems. Reprised from last year's EP on HoZac, "Another Girl" is still the most fun you can have with your clothes on. And I love the passion and intensity of Louie's vocals on a lot of these songs. Whether it's a heartbreaking ballad ("Tru Luv"), a ripping jolt of melodic punk ("Heart and Soul"), or a balls to the wall rocker ("I Don't Share"), Louie really excels at injecting his personal stories with genuine emotion. When he sings of loss and betrayal, you really feel it. In that respect, his songwriting truly transcends genre. And as a band, Missing Monuments tear into these songs with tremendous power and energy. Julien's lead guitar work is absolutely sick, and that rhythm section (Divine and drummer Aaron Hill) is a machine.

The CD version of this release is a deluxe package - tacking on the band's first LP in its entirety plus the HoZac 7" for a total of 23 tracks. What a deal! If this is your first time buying a Missing Monuments release, you will definitely hear a discernible evolution from where the band was a couple years ago to where it is now. But I never bought into the whole "power pop" pigeonhole in the first place. As far back as two years ago, I was comparing these guys more to the likes of the Compulsive Gamblers. And they've continued to carve their own identity as a band. Who else out there is doing poppy Southern-ish rock n' roll with dueling Flying V's and epic metal solos? It's definitely a distinctive mix of things that makes Missing Monuments the spicy musical gumbo that they are. And while it all starts with Louie's raspy voice and brilliant songwriting, that's not where it ends. I think what we have here is the next great American rock n' roll band. And they're just hitting their stride!

I really dig this record too!

(wanted to get in touch w/ you via email, how do I do that? i'm: blair.amberly (at) gmail