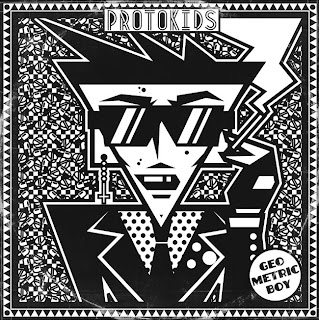 How long has it been since I reviewed an Alien Snatch release? A while! Back in the heyday of my "career", Alien Snatch was the gold standard for all record labels. When a package from Alien Snatch showed up in my mailbox, it was like Christmas morning! And while Daniel doesn't put out the sheer volume of stuff that he used to, he's still got impeccable taste. Out of Paris, Protokids are the newest addition to the Alien Snatch roster. And they've got a "classic" Alien Snatch sound for sure. Without hesitation, I'd say their 7" Geometric Boy is one of the best things the label has ever released. If you loved all those old UK and Irish bands that blurred the lines between power pop, mod, and '77 punk, you're gonna go totally nuts for Protokids!

In a style that brings to mind everything from the Power Pearls comps to the classic sounds of Good Vibrations Records, Protokids power through four tracks of punky pop that could easily pass for genuine artifacts of 1979. This is probably the most Brit/Irish sounding French band I've ever heard, and clearly that's due to the group's obvious affection for greats such as Protex, The Jook, Incredible Kidda Band, and Rudi. The title track is fast-paced and super catchy, but to me the "hit" is the punchy and passionate "Please". Also great is "Teenage Bore", which splendidly marries pop melody to a punk edge. "Self Conscious Over You" is an Outcasts cover and a perfect reference point for what this band is all about. Within this genre of music, Protokids are definitely in the top tier. So if you're thoroughly convinced that today's powerpop/punk has nothing to offer, I'd urge you to give this band a chance. You could put this record in with your stack of obscure singles by the likes of the Moderns and Rousers, and most people wouldn't know the difference. They're bang-on with the style, and they really understand how to write a good pop song. And from a production/recording standpoint, this record blows the band's previous recordings out of the water. Power pop fans, this is one you will not want to miss. Your "Best of Summer 2013" mix is incomplete without "Please"!

I've been waiting for this review. Nice work!