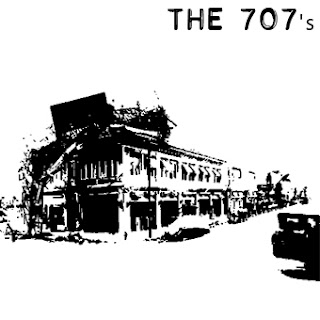 If I'm going to call my blog "Faster and Louder", I damn well better be on the lookout for some raw and raging punk rock. I've found exactly that in the most unlikely of places - Ft. Lauderdale, Florida! The 707's play it fast and furious with pissed-off lyrics and a tough, anthemic sound. It's the kind of stuff that makes you wanna wave your fist in the air and shout along until you're hoarse. If this were 1996, you might call their music "street punk". But I prefer to let the band label themselves - they call it punk rock n' roll. And that's what's awesome about these guys. They take the speed and ferocity of early '80s hardcore punk and mix in a heavy dose of rock n' roll. They've posted five songs on their ReverbNation page, and the shit straight-up rips. This is exactly what the world needs - a punk rock band with real passion and something to say, but without an ounce of pretension or cheesy p.c. rhetoric. If "Rats Get Fat" and "Unemployed" don't get you fired up, perhaps nothing will. And you have to love that this band has not one but two anthems in "707" and "Ours Not Yours"! Surely the regulars go nuts when these songs get played live. Or at least they should. I believe there's an EP in the works, and no doubt you'll all be raving about it in a couple months. But why wait? Get hip to this action now! It's a little bit of a cliche to say that punk rock will never die, but hearing bands like this reminds you exactly why that's the case. Get in the pit!