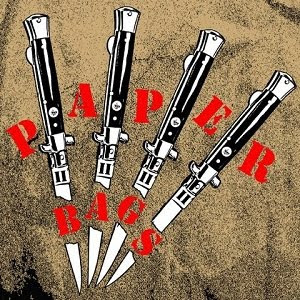 You've got to love it that Paper Bags titled their second EP Paper Bags II. How freaking cool is that! But that's where the similarity to Van Halen or Led Zeppelin ends. No arena rock here, folks. The real action is at the bar! As you'd expect from a San Francisco all-star garage punk band, the frames of reference are mid '90s lo-fi trash and early '80s pre-hardcore snot, with a dash of Oi! to boot (no pun intended - I swear!). I looked over my review of the band's last EP, and I was all over that shit! And with good reason - this band rules large! Paper Bags' music is everything punk rock should be: fun, stupid, catchy as hell, and often in questionable taste. And in a world where sequels are almost never as good as the originals, Paper Bags II is actually better than its predecessor! "Knife" kicks it off in ripping fashion, and there's zero let-up from there. If you're like me and used to order records solely based on Bruce Roehrs's endorsement in Maximumrocknroll, this is the band for you. "S.Y.F.A.T.B.", in fact, is a tribute to Bruce Roehrs ("See you fucks at the bar!"). There's also a tender little dittie about contracting an S.T.D. and a cover of a classic early '80s punk obscurity ("Mommi I'm A Misfit" by The Tragics a.k.a. The Misfits). Yeah, I know! What's not to love? Gulp down a cheap beer, wave a fist in the air, and sing along loudly! If "garage street punk" really is its own genre, Paper Bags are its new kings!

This is the fifth No Front Teeth/Rapid Pulse Records co-release that I've reviewed in the past few weeks, and I've got to say that every single one was phenomenal. These guys are on a roll! I always thought that Rapid Pulse was the world's great unheralded punk label in its time, and right now No Front Teeth is the best label going by far. It's great to have Rapid Pulse back, and it's awesome to see these two labels working together. Talk about a dream team! Let's hope there are many more co-releases to come! For more info on the Jim/Marco collaboration, check out the cool interview Mike Frame did for Razorcake!

http://www.facebook.com/#!/paperbagsrock
Posted by Lord Rutledge at 8:24 AM