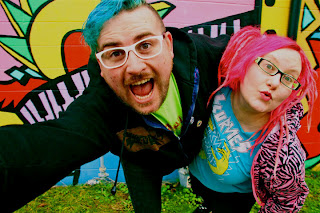 Married couple Nate and Tessa Allen have been playing folk-punk together since 2007, and amazingly they're already on their seventh album! The Portland duo, who call themselves Destroy Nate Allen, usually operate with just two voices and one acoustic guitar. But on their brand new album, With Our Powers Combined, they've enlisted a backing band in Asian Man recording artists Gnarboots. The idea was to try and capture the punk rock spirit of their live shows in the studio, and I think they've genuinely succeeded. Nate, like me, was weaned on '90s pop-punk, which proves to be a major influence on DNA's sound. With Gnarboots backing them, Nate and Tessa amp up their goofball sing-along schtick and go full-on electric. Skillfully, they walk a very fine line between super silly and downright annoying. They have quite a way with these simple, almost infantile hooks that get stuck in your head and refuse to go away. It's like you want to hate them, but they easily win you over with infectiousness and fun. Before you know it, you're singing along to their wacky songs about everyday life. Truly, there's no other band out there like this. What do you even call this music? Poppy ska-punk joke-folk synth rock? Beats me! All I know is that I like it! Think The Revillos meet The Wiggles meet Less Than Jake meet Garth and Kat. In my notes, I kept jotting down words like "chipper" and "cute", which might offend a lot of bands. But in the case of DNA, I think they'd probably concur.

If you ask me, the "hit" is "Emergency". But nobody asked me, so the first single is "We Talk Occasionally On The Internet". Once again, they're gonna shove that hook down your throat...and you're going to love it! Whether they're partying like it's 1996 on the ska-core sing-along "Chick Flick" or channeling their inner Violent Femmes on "Long Weekend Blues", Nate and Tessa maintain a contagious joyfulness that's very much in keeping with their live rep. I love that their press kit quotes this review: "Why even continue to call your self a punk act when clearly you are playing joke songs with only an acoustic? Where is the pissed off lyrics and distorted guitars and blistering drums?" Too funny! Obviously these two have a sense of humor even if it's at their own expense. Hmmm. Joke songs aren't punk? You mean The Dickies have been hosing me all these years? Damn! As for the distorted guitars and blistering drums, they've arrived. Pissed-off lyrics, on the other hand, are not in Destroy Nate Allen's repertoire. So...if you're like me and think Jonathan Richman is more "punk" than, say, The Varukers, this is a band for you!