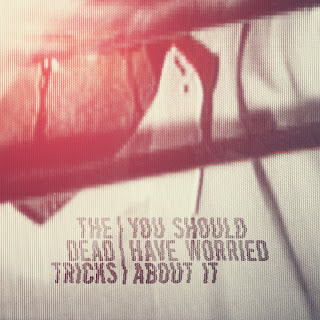 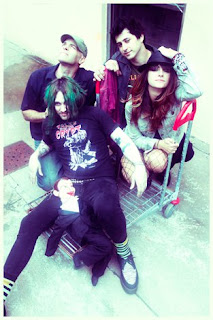 "The Dead Tricks came together with a shared commitment to the punk scene, keeping the passion of the way things used to be in New York in the late 1970s and the 1970s-loving 1990s, but without slavish nostalgia or jaded revisionism. This is a gang that obsesses over The Dead Boys, Johnny Thunders, The Dictators, as well as The Stooges, The Damned, MC5, Link Wray, The Cramps, The Gun Club, Hanoi Rocks, and The Misfits, but also realizes, hey it’s 2011— best way to show you love your influences is to try to equal them in songwriting quality and musicianship. It’s called inspiration."

Maybe it’s just a “writer thing”, but I’m a total sucker for a kick-ass band bio. How could you possibly read the snippet above and not immediately want to go running out in hot pursuit of Dead Tricks CDs, t-shirts, matchbooks, and bobbleheads? Hot damn. I wish I had written that blurb! But what’s great is that the music lives up to the teaser. I’d say, in fact, that it surpasses it. I always enjoy touting new bands, and New York City’s Dead Tricks are easily one of the best new bands to arrive on the punk rock scene in recent years. And while I’ve been known to champion revivalist-type outfits who brazenly rehash yesteryear’s punk rock glories, The Dead Tricks are not that kind of group. As advertised, they are very much a punk band for now. They don’t sound like any other band. They are not stuck in 1978. And by both honoring the past and embracing the present, they’ve secured themselves a fan base aged 13-70.

Long-time readers of mine will surely remember Dead Tricks guitarist Lorne Behrman from his days in the “classic” lineup of the Dimestore Haloes circa the mid-to-late ‘90s. He was a terrific guitar player then, and he’s an even better one now. He joins charismatic vocalist James Donovan and powerhouse rhythm players Manya Kuzemchenko (bass) and Kevin Cardwell (drums) in this supremely talented, rapidly up-and-coming punk group. You hear a Dead Tricks song, and you know it’s a Dead Tricks song. Frontman Donovan, in all the best ways, is 100 percent rock star. Vocally, he’s got flair. Think Andrew Wood meets Stiv Bators meets Axl Rose meets Billy Hopeless meets Mike Monroe - yet still completely one-of-a-kind. Teamed-up with Behrman and his Clash-caliber melodic leads, he propels that classic lead singer/lead guitarist chemistry that has defined so many of our favorite punk bands over the years. And as is the case with any great rock and roll band, it’s the stellar, unsung rhythm section that holds everything together.

The Dead Tricks’ debut EP, You Should Have Worried About It, was self-released and produced by Agnostic Front’s Mike Gallo. Demonstrating that DIY doesn’t have to mean amateurish, this disc sounds like a million bucks! This is what a punk recording should sound like - clean, crisp, and hard-hitting, with a sonic clarity that allows all four band members to shine. The EP’s got a real rock “edge” to it that strikes me as very current. And although it’s in no way “pop”, it’s absolutely loaded with hooks. If you like big, sing-along choruses, well-orchestrated backing vocals, and memorable, finessed guitar lines, you’re gonna want these tunes on your iPod yesterday! “Chocha Wave”, in addition to being hilarious, is a stone cold hit. Or at least it would be if they still played good music on the radio. The sophistication and range of the band’s songwriting yields a rewarding mix of material, from the radio-ready mid-tempo crunch of “Don’t Get High (Without Me)” to the delightfully creepy vibes of “Go-Go the Bone Mobile” to the raging hardcore ferocity of “Worm Travesty”. And while far too many run-of-the-mill punk bands opine dogmatically on political matters or wear the songs-about-girls motif to death, The Dead Tricks’ preference for twisted humor and horror themes brings to mind scene forebears like the Ramones, Dictators, and Misfits. Rather than imitating any of the above, The Dead Tricks instead carry on the lineage of great NYC punk, just like D Generation and the Napalm Stars once did, and just like other bands will continue to do until the end of time. New York punk rock, 37 years old and counting, remains a force to be reckoned with. And The Dead Tricks, if this debut release is any indication, are gonna be in the thick of it. Best new punk rock band of 2011, hands down!