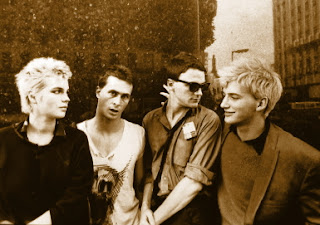 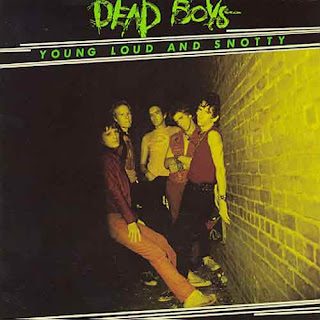 Yeah, I love old English punk. But on this Fourth of July, it's all about American punk bands. Here are the ten greatest ever in my opinion.

They join the Buzzcocks and Ramones in the holy trinity of pop-punk.
9. Misfits

Often lost in the imagery and idea of the Misfits is that the music itself was freaking incredible! One of the few bands that was still representing for classic melodic punk well into the ‘80s.
8. Bad Religion

Gotta love it that these guys were playing melodic and thoughtful punk at a time when angry high testosterone thrash ruled the day. They put out the classic Suffer in 1988 and have been killing it ever since.
7. Black Flag

I especially love their early stuff that was a cross between ’77 punk and ’82 hardcore, but even with Rollins this band was awesome.
6. Pagans
Perhaps the most underrated "classic" punk band. Check out my review over at Dirty Sheets.
5. Avengers

Three decades on, and all their old stuff still blows me away. Some of the most passionate and powerful music ever made in any genre of music.
4. Dead Boys

This one doesn’t need elaboration.
3. Descendents

Like Bad Religion, these guys were making great punk music at a time when almost nobody else was. Possibly the second greatest pop-punk band of all-time.
2. Dictators

You could argue that The Dictators weren’t really a “punk” band. You really could. But you’d be wrong.
1. Ramones
Duh!

So there you have it. Let the debating begin - especially if you're a fan of the Circle Jerks, X, Weirdos, Germs, Angry Samoans, Social Distortion, TSOL, or Dead Kennedys!

It pained me to leave out The Real Kids. Still kinda irks me that I couldn't find them a spot. Oh well. It's hard to pick just ten!

Never thought of The Real Kids as a "punk" band per se. Maybe because they're on a Rhino power-pop comp. That first album is godhead, nonetheless.

Sweet! That gets me off the hook. I love you, man!

Well, I'll be a monkey's step-uncle! Wikipedia referred to The Real Kids as a "Boston punk rock band." Micky Ward has just knocked me out.

Well I guess if I say the Dictators are punk, then the Real Kids probably have to be too. I'll officially declare them the 11th greatest American punk band of all-time!

I spent all day trying to justify my own 10 Gunny, ans I just couldnt! Its hard for me to distinguish who SHOULD be on the list versus who I think should be on a list... I suppose that I really see how my choices arent the best ones... I will endorse Joshs list. Im a big X fan, GERMS fan and JERKS fan... but I must honor LA PESTE, THE LEWD, the fuckin DICKS... i just cant decide. I really dig seeing THE PAGANS (Ohio proper) on there and THE AVENGERS. And i will say it here MILO GOES TO COLLEGE is one of the best stand alone albums ever. It really captures a moment. I cant tate that record without singing along.

Do you (whoever reading this) realise how ridiculous it is for an almost 40 year old gonowhere like myself singing about how im a boy and i will kill an i will destroy? Olive even looks at me funny!
Oh, and TATING a record is my new fancy way of saying im playing a record... TATE as in ROTATE.

I WILL REDEFINE EVERYTHING IN DUE TIME!!!

Well, well! Those are some compelling nominations, Shawn! Dicks, The Lewd, La Peste....Someday I may have to extend this list to a top 25! Plus there's the little issue of me not listing any "recent" bands. Seems like the Rip Offs oughta be in there somewhere.

THE WIPERS are damn near amazine really. I got a three CD box set of their stuff at Shke It records one day. It ha just arrived... They didnt even need to put it out, I snatched it right from the distributors box...

I listened to it nearly unstopped for about a month and half. Strong tracks.

The Wipers are one of the greatest American bands of any genre. Never really considered them a punk band per se (same goes with Husker Du), hence their exclusion from this list. I think Gunny's gonna review something of theirs for Dirty Sheets. How cool would that be!