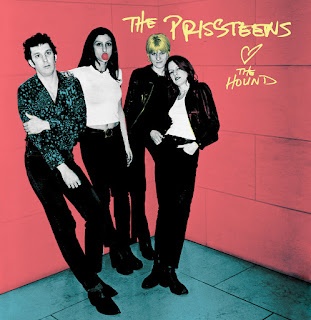 I've said it before, and I'll say it again: The Prissteens were one of the greatest punk/rock and roll bands to ever come out of New York City. It's exciting and quite a big deal that Girlsville has released the best of the band's non-album output on vinyl for the first time ever! Coming in at an impressive 16 tracks, The Hound collects demos the band recorded in 1999 in preparation for its never-completed second LP along with the tracks from its two brilliant 1996 singles, some songs demoed in advance of the Scandal, Controversy & Romance LP, and both tracks from the privately-released "Oh Howard" 7". It's the perfect companion piece to Scandal, Controversy & Romance - and without doubt a far better summation of what The Prissteens really sounded like. The 7" tracks alone would make this a must-own. The original version of "The Hound" remains one of the wildest and most thrilling garage rock cuts of its time. And "Teenage Dicks" is unquestionably one of the greatest covers recorded by any band ever. But what makes this album such a treat is that it gives you a complete picture of The Prissteens. It covers the full span of the band's existence - from the primitive exuberance of those essential 1996 sides to the more '60s pop and soul influenced material the band was demoing in its waning days. Given the limited amount of songs that can be put on a single LP, CJ's track selection was really critical to making this the ultimate second Prissteens long player. Of all of the band's demos and rarities, these 16 songs are the cream of the crop. Far from mere curiosities, the '99 demos "Sugarboy" and "If You Really Loved Me" are two of the strongest recordings in the Prissteens catalog. The garage rocker "I'm A Mess" is an absolute ripper that rivals the ferocious energy of the band's 7" tracks. The demo version of album favorite "Someday" is far rawer than its better-known counterpart, yet equally great.

Given that there's no actual overlap between The Hound and Scandal, Controversy & Romance, both albums are essential purchases capturing the overlooked greatness of the mighty Prissteens. But while the latter may be difficult to track down, the former is available hot off the presses from Girlsville's Bandcamp. And if you're a super fan, you might be interested in the CD version of The Hound which tacks on 12 more tracks that didn't fit on the LP. Combining the best elements of punk rock, girl groups, garage rock, and '60s pop, The Prissteens were probably out of place on a major label in the late '90s. But in this age when so many bands of a similar spirit have carved out a really nice niche for themselves in the underground, The Prissteens ought to be recognized as true OGs of that whole scene. If you're a longtime fan, The Hound is a no-brainer purchase. And if you're not yet a fan, just push play and you'll quickly become one!