Phone Jerks - Out the Gate 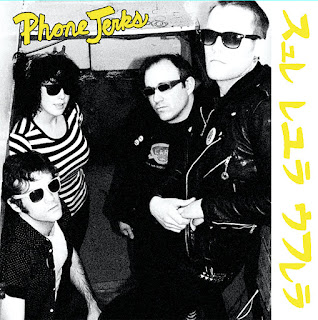 If Phone Jerks' recent 10-inch full length was not quite full enough for your satisfaction, you should be glad to hear that the band's new EP Out the Gate restores those missing couple of inches and tacks on another five for good measure. That makes 17 inches in all - essentially a full album and 42% of another. No one is getting short-changed on this band's watch! And while Out the Gate is comprised of songs recorded in the same sessions that produced Phone Jerks' two albums, it would be a huge mistake to refer to this material as "scraps". These songs weren't cut from their respective albums so much as they were being saved for a killer 7". The Moncton (yeah, that's in Canada) foursome clearly gets that punk music was made to be played on 7" vinyl. So here we have it - a joint release between Resurrection Records from the USA and Wanda Records from Germany (the Germans sure love Phone Jerks, and why wouldn't they?!). With this EP largely being a continuation/extension of last year's 10 x 10, it's logical that the vibe is similar. These songs hit that sweet spot where Rip Off Records circa 1997 and Sire Records circa 1977 smash into each other at full speed. And true to the band's intentions, this is indeed an absolute ripper of an EP. The title track (an ode to the failed racing career of Emily and Tyler's greyhound Donair) will send you straight to budget trash paradise. "Gospel" is a raging kick in the teeth a la first album Saints. "Kill Kill" falls somewhere in between and must immediately be considered a classic Phone Jerks song. And I love how the band can take Protex's "Don't Ring Me Up" and make it sound like something Teengenerate might have written!

No less of a authority than the distinguished Mick Fletcher has placed Phone Jerks in the highest pantheon of present-day garage punk, and I concur wholeheartedly. I just love how raw and tough these recordings sound (the guitars, as the kids say, are fire). James from Outtacontroller (who have a new album coming out NEXT MONTH!) re-mixed these tracks and absolutely deserves some kind of award. I think in the beginning of Phone Jerks, there was the novelty of "Holy crap! It's just so great that we still have bands that sound like this!" But with each passing release, I'm more struck by what great songwriters all of these fine individuals are. That's right, I'm saying it: Phone Jerks aren't just cool - they're actually good! If you like old style punk rock that's equal parts guts and hooks, this is a must-hear band. The digital version of Out the Gate includes a bonus cover of "Drive Me Crazy" by The Penetrators. Talk about a perfect choice in cover material! I would generally recommend that all fans of The Penetrators check out Phone Jerks and that all fans of Phone Jerks check out The Penetrators. And they really nailed this rendition of "Drive Me Crazy". If they ever needed to, they could totally headline the Catalina Wine Mixer as Atlantic Canada's preeminent 1980s Penetrators cover band. Vinyl ships this coming Saturday. You can order now over at the Resurrection Bandcamp!