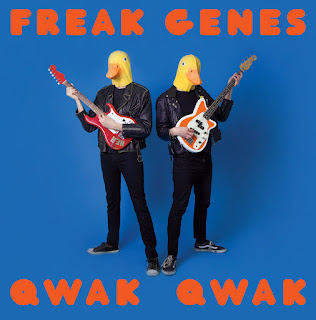 Well that didn't take very long! Less than 10 months after the release of their brilliant debut album Playtime, Freak Genes are back with another long player that will disappoint absolutely no one! Out on Drunken Sailor Records, Qwak Qwak picks up where Playtime left off and quickly surpasses it. The men behind the masks, of course, are Andrew Anderson (The Hipshakes, Proto Idiot) and Charlie Murphy (Red Cords). Freak Genes began with a fun premise: what would happen if these two guys took some of the crazy, rejected ideas from their other groups and made a whole new band out of it? What happened was one of the best punk albums of 2017 or any recent year for that matter. Qwak Qwak still finds Freak Genes straddling the quirky/experimental and poppy sides of early U.K. punk. But the real advancement here is the introduction of synthesizers and drum machines to the duo's arsenal. Limited only by their own imaginations, Andrew and Charlie flutter between punk, new wave, synth-pop, garage rock, and post-punk over the course of 17 filler-free tracks.

If you enjoyed the Wire meets early Buzzcocks vibe that was so prevalent on Playtime, the first two songs "At Odds With You" and "On The TV" will quickly have you on board with Qwak Qwak. The latter is surely one of the most essential punk tracks of the year. But there was no way a band with Freak Genes' origins was ever going to allow itself to become predictable. With this record, you never quite know what's coming. These guys prove so adept at synth-pop that I would absolutely have believed that "Give Way" and "Read The Papers" were original recordings from 1980. "Destroy" sets aside the band's usual playful disposition and goes full-on scary future post-punk. "Layers", on the other hand, is delightful Kinks/Who derived pop that will have you whistling on your way to work. And then there's the wonderful "Talk 2" - which sounds like a song Robyn Hitchcock would write to play at a bar in the Florida Keys.

One spin through Qwak Qwak will suggest influences as disparate as Syd Barrett ("Anonymous"), Gary Numan ("We Want Trouble"), and Devo ("It's Not There"). And there are certainly tracks ("Not Quite Enough", "Drainage") that bring to mind Andrew and Charlie's other bands. What's remarkable is how well the whole thing flows. It's weird to say this about a band that is only on its second record, but the one thing that's consistent throughout 17 tracks is that it all sounds like Freak Genes! These are two extremely talented individuals, and their chemistry is undeniable. Their willingness to entertain almost any musical idea is what makes them unique. Their ability to do so while still aspiring to write great pop songs is what makes them exceptional. I look forward to their next 20 albums!

Posted by Lord Rutledge at 1:00 PM