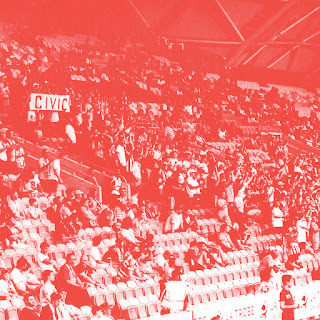 How about another killer band from Australia! And when I say killer, I mean KILLER! Hailing from Melbourne, Civic picks up the Dead Boys/Saints torch and burns down everything in its path. You may know some of these individuals from their turns in groups such as Leather Lickers, A.D. Skinner, Drug Sweat, Pregnancy Scares, Whipper, and Cuntz. On its debut 12" New Vietnam, Civic comes hard with seven blistering cuts mixing the timeless style of '70s punk with the wildfire aggression of Detroit rock. The influences are obvious, but who cares?! This is old school punk rock n' roll done right! If you appreciate ripping leads, pummeling riffs, hard-hitting drums, and a singer who can really holler, this is definitely the band for you. I love how everything sounds so raw and loud! They really managed to get that "live" energy captured on tape. The opening 1-2 punch of "Nuclear Son" and the title track will rock you into next week, and the band's attack doesn't really slow from there (except on the Lou Reed inspired "Street Machine Dream", which I totally dig). I'm left wanting more, which is exactly the way it should be on a punk band's debut release. Truly hot stuff! New Vietnam is available on vinyl and CD from the Aussie label Anti Fade. Get the 12" while you can!