Return of the Disco Lepers! 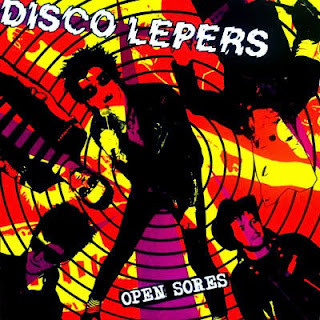 So after a four-year hiatus, the mighty Disco Lepers are back with a vengeance! These Londoners continue their quest to keep punk music vile and offensive - having just launched a three-song sonic missile called "Open Sores" in advance of a new LP due out very soon. After ten years as a band, Disco Lepers can still be counted on to deliver straight-up snotty punk rock in the timeless Killed By Death style. The title track is a total smasher - the kind of irresistibly repugnant ditty that you've grown to expect from this lovable gang of scums. You will find not the slightest hint of "maturity" - the band tearing into this tune as if on a mission of destruction and Vinny spewing vitriol like he's trying to infect everyone within earshot. "God Bless Mark David Chapman" is blistering and catchy as hell - a modern-day response to that popular joke that was going around in the '80s about a Beatles reunion requiring "three more bullets". Yeah, of course they went there! Coming on in a noisier vein, "Carbon Black" is a parting shot of jagged unpleasantness that ought to leave you fully primed for the new album Sophisticated Shame.

Out on No Front Teeth Records, "Open Sores" is sure to sell out fast. So the time to jump on this bad boy is now. I highly recommend ordering the limited edition of this release - which features the second installment in the Jet Comix series (illustrated by the immensely talented Jackie Sudden). It's incredibly cool and a total must-have if you're a Disco Lepers/Gaggers/No Front Teeth fan. So if you'd like to see Disco Lepers embark on a time traveling mission to kill The Beatles, email the label at NFTzine@hotmail.com to make the necessary arrangements! And be sure to check out the brand new Disco Lepers Bandcamp page - where you can download all of the band's releases and listen to a teaser for Sophisticated Shame!

awesome post josh, probably my favourite songs by them yet. i'll have to stick taser date on my blog