New album from The Ungraded! 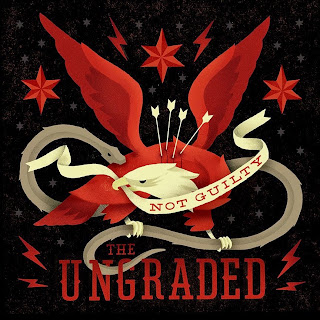 The Ungraded call themselves a "high energy Boston rock band with punk fringe". The group more than lives up to that description on its brand-new album Not Guilty - a storming blend of hard rock and punk steeped in Boston's grand tradition of loud, aggressive rock n' roll. While still a relatively new outfit, The Ungraded is comprised of guys who have been playing in bands for decades. And that totally comes through in the music. Compared to the band's previous album Making The Grade, Not Guilty dials up the rock factor in a major way. I'm talking full-on, amps-to-11, blazing guitars rock n' roll - and you should be heavily fined if you don't play it loud. Not Guilty could almost pass for a lost artifact from the late '80s or early '90s - when this kind of punk-influenced hard rock was at the peak of its popularity. Jumping off with big rock guitar leads and heavy, sludgy riffs, "Mariposa" sets a tone a straight-off. The Ungraded have come to rock, and they intend for you to have a good time. Singer Dean Calamari has a really cool voice. And he and his band mates can really freaking play. The challenge for this kind of band is always the same: how do you manage to get the energy of your live show to translate in the studio? It works for The Ungraded largely because the band understands the perfect simplicity of a good arena rock hook. You could slide "Won't You Please" into heavy rotation on any classic rock radio station, and few would suspect it wasn't some forgotten hit from thirty years ago. That chorus just has a way of getting into your head. And the near epic "Supermodel Fucker" is the kind of song that only seems ridiculous until you realize you've been singing it all day. I'm betting that live crowds go absolutely nuts for this number.

There's something undeniably Boston about The Ungraded. This is a band that doesn't have to define itself strictly as punk, garage, or rock. It's a product of all of these things - and of a musical culture that has continually embraced real rock n' roll through thick and thin. "Worst Feeling" marries Stooges/Dictators punk to guitar shredder metal. "Outside My Window" alternates between an Alice Cooper-esque dirge and a speed punk adrenaline rush. While no studio album can fully replicate the concert experience, Not Guilty succeeds because it'll make you want to see The Ungraded live. And if you're in the Boston area, you'll have two chances this coming weekend to do exactly that. The band will be playing two shows for its red vinyl release weekend: one at Cooperfield's in Boston this Friday the 15th and another at Koto in Salem this Saturday the 16th. Check The Ungraded's Facebook page for more info!

THANK YOU LORD RUTLEDGE !!!! COME CHECK US OUT LIVE.