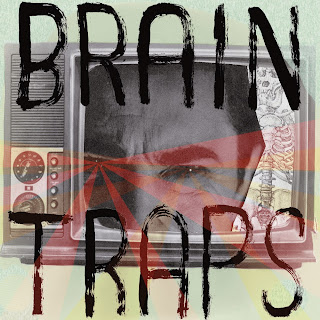 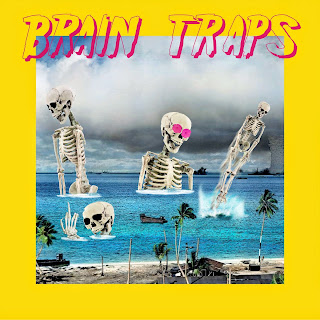 With so much music that's neither lo-fi nor trashy being labeled "garage" these days, my cravings for genuine lo-fi trash are at an all-time high. You know what I'm talking about: three-chord rock n' roll, played super primitively, and recorded on cheap equipment. And so we have Brain Traps - a band out of  Cologne, Germany bashing out a brand of garage punk that throws it straight back to the early '90s. Alien Snatch Records - my favorite record label of all-time - proudly presents not one but two new releases from Brain Traps. One is the band's self-titled LP, and the other is the third volume of the label's Teen Trash series - an installment that was a whopping 13 years in the waiting!

So we'll start with Teen Trash. The series began in 1999 with the intention of promoting the next generation of Supercharger/Teengenerate/Rip Offs disciples. The Highschool Rockers (future Kidnappers) were the first to be featured, followed by the Teenage Rejects in 2002. Given that those first two volumes are now considered to be garage punk classics, it made sense that Daniel couldn't do a third volume until he found the perfect band. Mediocrity would not do! So he waited and waited, holding out hope that he'd come across another group worthy of the Teen Trash brand. And, finally, Brain Traps are it! Teen Trash Volume III consists of four early Brain Traps tunes from 2013, recorded on 4-track and taken to another level by Rip Off Records mastering whiz Jim Kuczkowski. If you long for the days when you never missed a new release from labels like Rip Off and Radio X, you're gonna go apeshit crazy for these four lo-fi smashers! This is garage punk as nature intended: raw and wild, yet catchy as hell. If "Radical Bongo" doesn't melt your face off, you're probably wearing fireproof headgear.

While not nearly as "crude" sounding as the EP, the full-length is still plenty lo-fi and plenty trashy. And more than anything else, it's fun! Perhaps Brain Traps have refined their instrumental and songwriting skills just a little bit over the last couple of years. And it seems they've been listening to a lot of classic '60s garage rock in addition to the '90s stuff. The result is a ripper of an album that's equal parts garage and punk. Tracks like "Another Euro" and "Shoot My Baby" suggest the second coming of Supercharger, while the likes of "So Sad What's Left In My Head" seem straight out of 1966. And how can you not love a band that opens and closes its debut album with songs called "It's Alright"? Without a doubt, Brain Traps have given us the garage punk party record of 2015. And if you're not already throwing garage punk parties on a regular basis, Brain Traps have given you a damn fine reason to start!