New from The New Trocaderos! 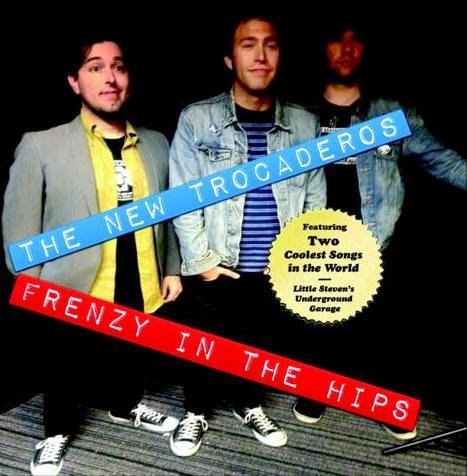 Is it weird that my favorite new release of the year is a compilation of songs I've already heard? I don't think it is! Even in this high-tech world of digital downloads and streaming music, I still have a personal need for recordings on compact disc. Essentially that's because my car is equipped with state of the art 2004 audio technology: a CD player! I can't think of a greater tradition in American society than listening to rock n' roll while you're driving. And I can't think of a better band to listen to while you're driving than The New Trocaderos!

Frenzy In The Hips compiles both singles from The New Trocaderos - the rock n' roll super group comprised of Kurt Baker, Geoff and Brad from The Connection, and songwriter/producer Michael Chaney. It adds a brand-new song called "Luckiest Man In The World" for a total of six tracks - the perfect length for my daily commute. But even if you're not in your car, listening to this disc is guaranteed to make your day more awesome. If you've been wanting to buy some of this band's music but have never gotten around to it, this is your chance to own all of it for one low price! Even though I was already familiar with these songs, there's just something super cool about having them all together on one disc. It's neat to listen with fresh ears to songs I hadn't heard in a while and be able to re-affirm my original rave reviews! I'm convinced that "Dream Girl" - featuring Geoff Palmer on lead vocals - has to be a long-lost classic pop song from the '60s. Apparently Little Steven feels the same way, since he chose to debut it as his Coolest Song In The World on a radio program that was otherwise devoted to all-time great tracks from The Beatles and Paul McCartney. Every detail - from the gorgeous harmonies to that majestic bridge to Kris Rodgers's knockout keyboard solo - is flawlessly executed. And yet it's the straight-ahead rocker "Money Talks" that has become my favorite New Trocs song. I don't think a catchier tune exists in this world, and that lead guitar work is hot! Chaney ought to be immediately inducted into the Rock And Roll Hall of Fame for coming up with that "The money key opens every lock" line.

Tipping its cap to everyone from Carl Perkins to the Rolling Stones to The Ramones to Rockpile, Frenzy In The Hips condenses 60 years of amazing rock n' roll into 16 minutes of hook-laden fun. You get the complete package: a classic sound, amazing songs, and three great singers. If you were raised on traditional rock n' roll and have become disenchanted with the direction popular music has taken in recent decades, The New Trocaderos will restore your faith in new bands. But I also envision the reverse happening: younger people digging this band and then working their way back to the British Invasion and '50s rock n' roll. If you already own the first two singles, the lure here is the fantastic "Luckiest Man In The World" - which sounds like a song the Beach Boys might have recorded with Keith Richards and Mick Taylor sitting in on guitar. Why not splurge on the whole disc?! Get it exclusively through Kool Kat Musik!