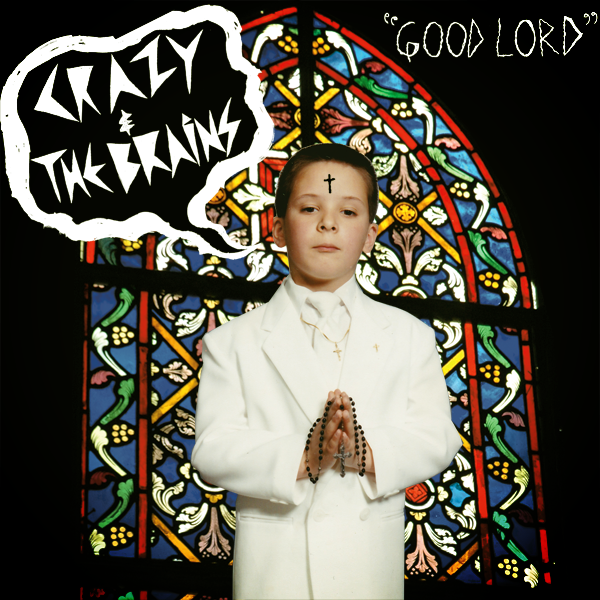 Crazy & The Brains seem to be the originators and sole practitioners of a musical genre known as anti-folk. I can't tell you exactly what anti-folk is, but I'm pretty sure it's the polar opposite of music that takes itself too seriously. And of course that's a movement I can fully endorse! This New Jersey punk outfit is kind of like a cousin band to party rock standouts such as New Swears and Mean Jeans. And in this case, I'm talking about the kind of cousin who always shows up to family gatherings and makes inappropriate sexual remarks at the dinner table.

As just about any Crazy & The Brains review will tell you, there's no point in trying to define what this band is. They're pop, and they're punk. But they're not pop-punk. They're goofy, but they're not a joke band. To my knowledge, this is the only band on earth playing xylophone-driven punk rock. And boy, do they ever pull it off! However you choose to classify it, the band's new EP Good Lord is as catchy and infectiously fun as music gets. If these tunes don't have you jumping around your house like a pre-teen on a Halloween candy bender, you probably are suffering from a severe lower body injury. The twist is that these sugary pop songs are anything but sweet once you start paying attention to the lyrics! Hint: "Ice Cream" isn't about, uh, food. There's an absolute brilliance in combining bubblegum melodies and a happy go lucky energy with lyrics so dirty that they make 50 Shades Of Grey look like Sesame Street. And ultimately, the triumph here is that these songs are just so fucking good. "Syreita" sounds like the R-rated smash that Tommy Roe always wanted to record. It's going to be stuck in my head until the end of time. And while a line like "Sometimes I think of you while I'm lying underneath her" will certainly grab your attention, "Kids In Da Hall" is actually a heartfelt and quite touching ode to lost love. All you punk/powerpop freaks are going to want to hear it.

Crazy & The Brains are as unique as any band I've reviewed in my life. If a punk rock manual existed, these guys burned it and peed on the ashes. Yet in its own special way, Good Lord is precisely what I've always loved in music. It's rockin', catchy, and full of attitude and energy. Don't bother trying to classify it. Just enjoy it!