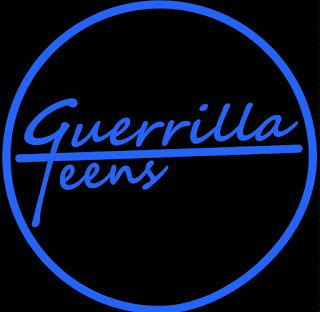 Guerrilla Teens first came to our attention back in the year that cannot be mentioned, releasing numerous socially-distanced recorded demos throughout the year. This was an exciting moment for the rock and roll world as this new band featured some prominent ex Humpers/Lovesores and a couple more Portland punk rock luminaries. Those digital releases were made available with the caveat that they would soon disappear. And disappear they did. Now Guerrilla Teens have delivered their proper debut release, a ripper of a single called "Halfway To Maybe." The demos were promising, but this is what we were all expecting from Guerrilla Teens. Out come those guitars in full fury. In comes Scott "Deluxe" Drake bellowing, "Can't make up my mind to save my life/Indecision's such a pointless crime/Remember how they said 'If not now, when?'/Well tell me what to do, and I'll lose again." Then that chorus hits, and you're shouting along, fist thrust forcefully in the air. Yeah, kids, this is rock and roll! You know the magic happens when Scott Drake and Jeff Fieldhouse make tunes together, and "Halfway To Maybe" is the perfect re-launching point for their songwriting partnership. On the B-side, "The Other End of the Leash" is a raging shot of American-style '77 punk rock and roll. It's a thumping, gritty number that builds to a chorus that smashes you in the teeth. Drake is in prime form here — fully channeling the wrath of a chained animal. And it's a thrill to hear the righteous guitar racket that Fieldhouse and Saul Koll can kick up as a tandem. Ably driving this rock and roll machine is the formidable rhythm section of "Anna Bananas" Anderson and "Teenage Tim" Connolly. What a lineup. What a band!

"Halfway To Maybe" is coming out soon as a 7" record, but you can grab the digital version now from Bandcamp for $3. If all you punk rock and roll fanatics aren't already going ape over Guerrilla Teens, you will be soon!