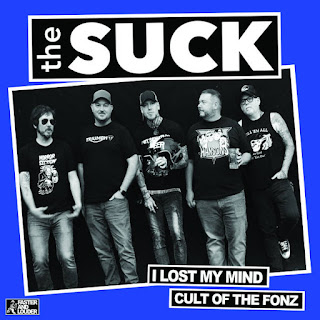 I kind of don't like Ramonescore  — except for when I totally love it! There are a handful of bands in existence that can pull off this very specific genre of music. More often not, for reasons no one can possibly explain, these bands are Canadian. So it makes sense that a Canadian record label would put out a really good Ramonescore record. Faster and Louder Records out of Ontario is responsible for a split 7" pairing London's Johnny Terrein and the Bad Lieutenants with the SUCK from Harrisburg, PA (717 represent!). Of course the SUCK is at a disadvantage in lacking Canadian citizenship. But given that three different American states are in conflict over being able to claim the SUCK, the band's geographical ties are still up in the air. The concept of this release is that each band covers one of the other's songs and also contributes an original song. The headline is that Johnny Terrein and the Bad Lieutenants had the balls to cover THE BEST song by the SUCK: the street rock anthem "Partytown USA." The second headline is that the SUCK's second-best song is on this very record! That's right: I'm going to jump "Cult of the Fonz" over "Fantasy Beer League" on my big board of SUCK songs. It was not an an easy decision, but I carefully considered it over many beers and evenings. I feel like "Cult of the Fonz" is much bigger than just a song. It's practically a way of life. It should be an actual cult. Can you imagine gangs of middle-aged dudes running around in leather jackets? What would that be like?

Each band here does a very credible job of covering the other. I wasn't sure I could accept any band but the SUCK performing the hallowed "Partytown USA." But Johnny Terrein and the Bad Lieutenants pretty much crush this song! Their original, "Prisoner," is excellent as well. Perhaps the lesson here is that you can never go wrong with pop culture references. I also like that both of these bands are Ramones-inspired without being Ramones clones. If you like simple and solid no-bullshit three-chord punk rock, this record and these bands are well worth your attention. The 7" officially releases October 1st (the same day the SUCK plays its first-ever live show at Mom's Basement Fest in Youngstown, Ohio!). Blue vinyl is limited to 101 copies, and black is limited to 202. Faster and and Louder Records has no affiliation with this blog — other than that we both had the good sense to steal from the best.