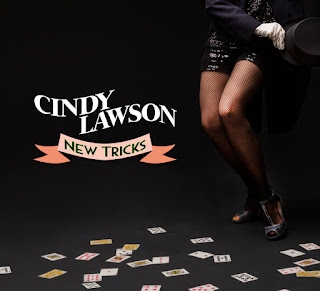 Eight days ago, I wrote about The Complete Clams, a 15-track retrospective on one of the most criminally underrated rock and roll bands to come out of Minneapolis/St. Paul in the later 1980s. This was just the first half of a duology of releases that fully welcomes Cindy Lawson to the Rum Bar Records family. It was followed yesterday by New Tricks -- the long-awaited solo debut from Clams vocalist and Twin Cities legend Lawson.
New Tricks is the first set of original songs recorded by Lawson since her old band Whoops Kitty released its self-titled CD in 1996. A quarter of a century later, Lawson's voice sounds as amazing as ever -- or perhaps even more amazing than ever. Within the first 30 seconds of my first contact with "How It Feels," her voice had sent chills down my spine. You can go back and listen to The Complete Clams or the Whoops Kitty album and hear a young talent of tremendous promise. After a long period of semi-retirement from the music biz, Lawson is back to completely fulfill that promise. To these songs, Lawson has brought decades of experience in life and music. And her songwriting skills clearly never left her. The well-named New Tricks incorporates many of Lawson's long-held influences (such as '60s pop and girl groups) while still sounding fresh, original, and modern in the year 2022. The album was superbly-produced by Steve Price (of the excellent '90s Twin Cities band Rex Daisy), who knows a thing or two about what a rocking pop record ought to sound like. From the crunching pop-rock of "How It Feels" to the sultry bounce of "I'm Not the Only One" to the garage rock inspired thump of "You've Got Quality" to the girl group majesty of "Dream Baby" to the hard-rocking grit of "I'm Loaded," this album covers a lot of ground without ever having to veer too far from the timeless structure of the three-minute pop song. A couple other tracks will be of great interest to long-time fans. The old Whoops Kitty song "Let's Pretend" gets quite the modern makeover. "Nope" is a loving tribute to its author -- the late, great Lori Wray. Both songs fit perfectly on the album.
Listening to the fabulous New Tricks, one might be tempted to curse the music gods for depriving Cindy Lawson of the stardom she so deserved. But who says it's too late? Far from a post-script on Lawson's musical career, New Tricks represents its rebirth. It's the work of an artist whose best days still lie ahead of her. She's got wisdom, she's got talent, and she's got that voice. All over the world, people are hearing tracks from New Tricks on underground radio shows and saying, "Wow, who is that?!" Malibu Lou spoke to me earlier this year about how blessed he is to work with some of the best singers out there today. He mentioned a few names in particular (Shanda Cisneros, Miss Georgia Peach, Jen D'Angora) which I absolutely agreed with. I must add Cindy Lawson to this select group, and I am sure Lou will concur! Locals will not want to miss Lawson's performance this coming July 15 at the Amsterdam Bar & Hall in St. Paul: a Rum Bar Records showcase event that will also feature Beebe Gallini and The Dogmatics! Wow and wow!
-L.R.
https://rumbarrecords.bandcamp.com/album/new-tricks-2
https://cindylawson.bandcamp.com/
https://cindysongs.com/
https://www.instagram.com/cindy.lawson/
https://www.facebook.com/RumBarRecords/
Posted by Lord Rutledge at 2:53 PM