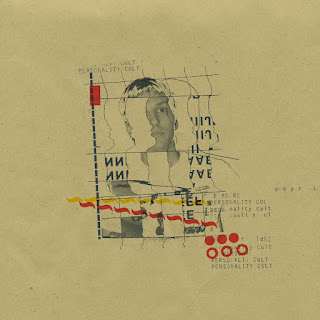 Drunken Sailor Records' perpetual winning streak remains very much in tact with the stunning debut album from North Carolina's Personality Cult! This band is the creation of Ben Carr from Natural Causes, who's doing something quite different with Personality Cult. Think old school powerpop/punk with plenty of quirks and a little bit of a jagged edge. Yep, that sure does sound like something Drunken Sailor would want to put out! And of course it sounds like a record I'd be enthusiastically touting! That early Buzzcocks influence is hard to deny, and the songwriting is just totally spot-on. Carr sure knows how to turn out a minimalist punk tune with a hook. It seems almost surreal that this music could be coming out of the American south in 2018...it just sounds so much like 1977 U.K! But given Carr's background, you know not to expect straight paint-by-numbers punk. And that's what I appreciate about Personality Cult. It's powerpop/punk, but with a unique touch to it. Plus there are songs that break from the general feel of the album. "Functioning Fine" is fully into new wave/post-punk territory, while "Fashionably Late" is Devo worship at its finest.

I could probably describe Personality Cult as kindred spirits/American counterparts to label mates Freak Genes. And you know how I feel about Freak Genes! This debut LP from Personality Cult is a surefire top ten album for 2018. If you like that old school catchy punk meets new wave type sound, check out a band that does it brilliantly!

good album, got heart attack on the show later today