New album from The Hot LZ's! 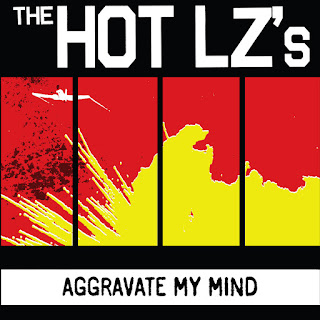 Ahhh! Nothing puts me in finer spirits than some good old hate-spewing, snotty-as-hell degenerate punk rock n' roll! Aggravate My Mind is the new LP from Portland, Oregon's Hot LZ's. And simply put, it's fucking great! The Hot LZ's take me straight back to the glory days of '90s punk rock n' roll, and that's no accident. Singer/guitarist Mark Death was a major player in that scene as a member of The Halfways. And like his contemporaries Scott Drake and Larry May, he's still killing it in 2016! The fact that Aggravate My Mind is out on a label called Hate Street Records pretty much tells you everything you need to know about The Hot LZ's. You know how some bands write almost nothing but love songs? Well this band writes almost nothing but hate songs, and I don't think I could ever tire of hearing Mr. Death rail against everything and everyone that pisses him off! Best-known as a bad-ass guitarist, he's also a terrifically snotty vocalist in the mold of a Stiv Bators or Metal Mike Saunders. Capt. Johnny Sensitive, the band's other lead singer, is a ferocious howler as well. Musically, The Hot LZ's hit that perfect mix of Stooges & New York Dolls worship and the Cleveland/New York strain of '77 punk. I don't hear this type of music as often as I'd like these days, and I'm especially pleased to hear it done so well. Death and Matt Waters hold up the fine tradition of punk rock n' roll guitar tandems - heating it up a la Chrome/Williamson/Thunders. The lyrics are totally on the mark - and so scathingly delivered. These songs are everything that punk rock ought to be: filthy and furious and completely unfit for polite society. What's not to love about a band that tears into a song called "Murder In My Heart" and leaves no doubt that it really means it?! Highest recommendation for fans of Dead Boys, Pagans, Humpers, etc.!