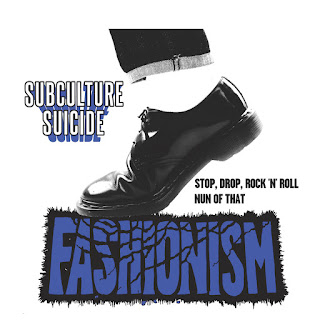 If you'd ask me for a short list of my favorite bands out there right now, Fashionism is definitely in the conversation. And with this Vancouver outfit having just delivered another knockout release, I should probably be talking much less about what other groups its members have played in (Tranzmitors, The Jolts, New Town Animals) and much more about this crazy run of top-notch singles! Without hesitation, "Subculture Suicide" is the best thing that Fashionism has released to date - and solid proof that those excellent first two EPs were no fluke. If you're still unfamiliar with Fashionism, here's your quick primer: take the '77 punk/powerpop stylings of Jeff McCloy's previous bands, add in even more of a glam influence, and get ready to jump up and down to some of the catchiest and most contagiously energetic music you could ever hope to hear. "Subculture Suicide" is a fine demonstration of McCloy's songwriting prowess - blending heartfelt lamentations on the commercialization of punk culture with music that's nothing short of joyful and triumphant (ya gotta love all of that clapping and stomping!). "Stop, Drop, Rock 'N' Roll" is like the 2016 version of Generation X's "Ready Steady Go" - a song that celebrates how fun and exciting and completely life-affirming the best music can be. "Nun of That", the band's "ode to 1970s habit horror", is a hyperactive shot of herky jerky punk that will leave you dizzied and delighted. And that's that! Fashionism has again left me wanting more - which is exactly how it should be.

This is usually the part of the review where I implore a band to hurry up and produce a debut LP. But with EPs this good, who needs albums?! If you look at similar groups throughout history (Undertones, Pointed Sticks, Buzzcocks), it's ultimately the singles that we love the most. Is there anything better in life than putting a 45 on the turntable and basking in two and a half minutes of pop perfection while you brush your teeth or change your clothes or dance around your bedroom like a maniac? Fashionism is a band made for that very experience, and I highly recommend heading over to the Dirt Cult Records web store and pre-ordering a vinyl copy of "Subculture Suicide". Official release date is July 26th!