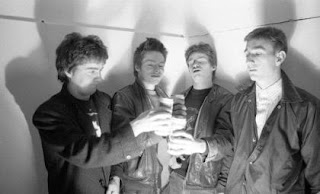 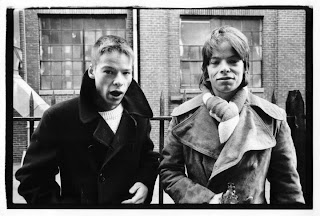 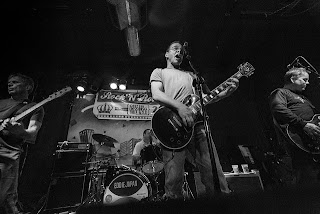 When it comes to all the fabled punk rock scenes of "back in the day", I'd probably take Boston over New York, Detroit, Chicago, San Francisco, or even L.A. And my favorite Boston band, by far, would have to be the Dogmatics. To me, they're pretty much the definitive Boston garage/punk band. Their music is Boston. Although the group's recording career was cut short by the tragic death of bass player Paul O'Halloran, the Dogmatics produced more legendary songs in a six-year period than most bands turn out in decades. Originally issued on CD by Shredder Records in 1995, Dogmatics 1981-86 is one of the all-time essential compilation albums. It's a must-own for anyone who reads this blog or digs the kind of music I write about. Seriously: I'm giving you all 30 days to acquire it. There will be inspections.

By the mid-'80s, punk music was largely turning away from the melodic sensibility and rock n' roll roots of its early days. But the Dogmatics didn't fit in one bit with that trend. They were pure fun. They played sloppy, poppy punk rock n' roll with a heavy rockabilly influence. They were like Eddie Cochran, Johnny Thunders, the Ramones, and early Replacements all rolled into one. And at a time in which punk rock was becoming very political and overly serious, the Dogmatics preferred writing songs about chasing girls, guzzling beer, and enduring the terrors of tyrannical Catholic school nuns. The classic track "Hardcore Rules" hilariously goofs on the bonehead direction punk music was beginning to take circa the early to mid '80s. It's my favorite Dogmatics song. Never ones to take themselves seriously, the Dogmatics were the class clowns of mid-'80s Boston punk - Irish/Catholic hooligans in search of teenage kicks playing shambolic three-chord rock n' roll with melody and guts. Comprised primarily of the band's LPs Thayer St. (1984) and Everybody Does It (1986), the 20-track 1981-86 is pure gold from start to finish. It sounds like a "greatest hits" collection, and in a certain respect that's precisely what it is. I'll put the likes of "Hardcore Rules", "Shithouse", "Teenage Lament", "Drinking By the Pool", "Sister Serena", "Gimme The Shakes", and "Thayer St." up against the classic songs of any garage/punk band of the Dogmatics' day. While these guys may have presented themselves as marginally talented degenerates making simplistic party music, they truly had a knack for writing perfect punk/rock n' roll songs. They shoulda been huge.

Brothers Pete (guitar/vocals) and Paul O'Halloran (bass/vocals) and Jerry Lehane (guitar/vocals) were Catholic schoolmates and childhood friends for eight years at St. Matthew's in Dorchester. Although separated for several years when both families moved out to the 'burbs, they stayed in touch and reconnected in Boston as young adults. Paul, who'd previously played in the Savage Beasties, recruited Pete and Jerry to join him in a new band along with drummer Dan Shannon. Tom Long eventually replaced Shannon on drums, and the permanent Dogmatics lineup was set. As their band bio says, "The Dogmatics would eventually end up playing every shitty little club and backyard party in most of the United States." At a time when the likes of Gang Green, Lyres, Outlets, SSD, Classic Ruins, Negative FX, Unnatural Axe, Jerry's Kids, and Mission of Burma made Boston a true hotbed for underground music, the Dogmatics and their Thayer St. loft were at the heart of the city's thriving scene. Paul's death in a motorcycle accident in 1986 essentially ended the band - it just would not have been the same without him. In recent years, the Dogmatics have done a number of reunion shows with Paul's brothers Johnny and Jimmy O'Halloran taking turns filling on on bass. I, along with my fellow Now Wave writers Brian Mosher and Vinnie Bratti, was lucky enough to see one of those shows - on Cape Cod back in the summer of 2007. It was without doubt one of the ten greatest performances I've ever witnessed. Several top bands of recent years, such as The Locomotions ("Saturday Nite Again") and Heap ("Whipped"), have kept the music of the Dogmatics alive by covering their songs. And while 1981-86 has been long out of print on the CD format, you can still buy it in digital form off of iTunes or Amazon. While the Dogmatics are rightfully revered in their home territory, outside of Boston I'd still consider them to be criminally underrated. Their Facebook page has a mere 790 likes. Come on, world! You're missing out!

Thanks for this! Always nice to know my brother Paul is remembered!