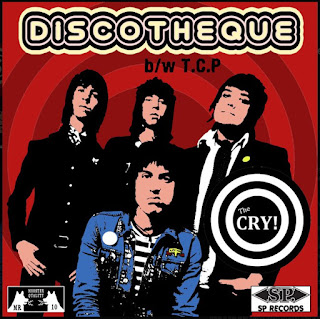 Wow, is this turning out to be the year of epic splits, or what?! Hot on the heels of last week's post on the Big Eyes/Mean Jeans split, I am delighted to report on another five-star team-up! And this one is HUGE! I'm talking two of my favorite bands! Ever since I first heard The Cry!, I knew they were destined to work with The Connection in some capacity. I envisioned a joint world tour and perhaps a feature film. But for now, a split 7" is a great start to this titanic alliance. The record officially comes out on Valentine's Day, which seems appropriate since these are two bands that really make the ladies swoon.

It's no big secret that The Cry! is one of my favorite bands of the moment. These guys do that '77 punk meets power pop thing that I've always loved, and somehow they've found a way to contemporarize it for a new generation. And while bands of this style always get points for fine musical taste, what really separates The Cry! from the pack is their exceptional talent. New jam "Discotheque" is just the latest in a long line of instant classic pop songs from these Portland lads, and it really shows an affinity for that early '70s Chapman/Chinn glam rock sound. The harmonies, as always, are on-point. And Brian's lead guitar work is hot! No doubt these guys could have gotten away with writing another ten songs just like "Modern Cinderella" or "Think I'm In Love". But as a fan, it's nice to be surprised by something a little different yet equally awesome. And if "Discotheque" sounds like the best song The Boys never wrote, it's only appropriate that the band also tackles a song The Boys did write: "T.C.P." As far as I'm concerned, there can never be enough Boys covers. And this one is really great: faithful to the original but by no means a straight-up copy. It seems The Cry! is gravitating towards power pop with a more rock n' roll edge, and I'm really stoked about that. They're right in the thick of the "best band in the world" conversation!

The Connection had to come strong to pull their weight here, but of course they've delivered as always. This band is just total class all the way. New England's newest hit makers never disappoint. "Don't Let Me Sleep Too Long" is a spot-on cover of the Myddle Class/Blues Project garage standard from 1966, while "She's Gonna Leave You" is another perfect shot of post British Invasion power pop a la LP gems "All You Gotta Do" and "I Want You". I think it's neat that these cuts show both sides of The Connection: the high energy garage rock side and the tuneful '60s pop side. These fellas always take it back to the days when rock n' roll made the girls scream and had all the kids dancing. And a la The Cry!, what makes them stand out in a somewhat crowded throwback rock n' roll field is their A-grade songwriting. I've been a fan of this band for a couple years, and "She's Gonna Leave You" is my favorite song of theirs yet!

Alright, kids! Although not officially released until Thursday, this split is limited to 500 copies and selling fast! Hop on over to Mooster Records and get in on the action!

Learn how to get a song on itunes at ReverbNation.com

Beauty is in the eye of the beholder... it is all classic. How many is SP Records going to make?

Here is the New split release from our new LP... hope you enjoy...