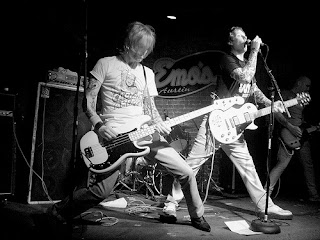 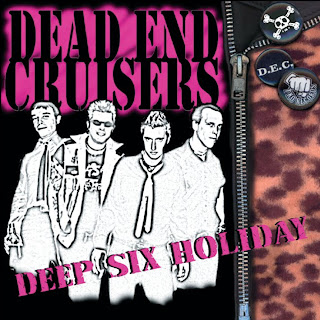 I started doing zines in 1995, and looking back I was really lucky to have arrived on the scene at just the right time. I got to see, hear, and cover a lot of truly great bands. In a lot of ways, the mid-to-late '90s was a second golden age of punk rock. Sadly, few if any of my writings from those years remain. Sometimes I'll Google bands I dug back then, and there's hardly any evidence of their existence to be found on the Web. The purpose of this F & L Hall of Fame series, then, is to pay tribute to the groups I made my name championing. Lord knows I had my favorites. I've already posted pieces on the Dimestore Haloes and Prostitutes over at Dirty Sheets, so I've decided I should begin with Austin's Dead End Cruisers.

If there was a "holy trinity" of bands in my early days doing Now Wave Magazine, the Cruisers would have been part of it for sure. Unlike some bands that I had sniffed out from their inception, the Cruisers had been around for quite a while before I really took notice (their first 7" was released in 1995). It was their 1998 debut album Deep Six Holiday (TKO Records) that turned me, instantly, into a diehard fan. It quickly became a classic of its time. To this day I rate it as one of the four or five greatest punk albums released in the '90s. I still listen to it today.

While a lot of people categorized the Cruisers as "street punk", to my mind that was pretty far off the mark. Blending a palpable Clash influence with o.g. mod stylings a la The Who/Small Faces and good old greasy Texan punk rock n' roll, the Cruisers were an "old school" punk group minus the copycat inclinations of many of their contemporaries. What I noticed right off was how good the lyrics were. English born-and-raised frontman Neil Curran may have sounded a little like Mick Jones, but as a writer he had more in common with the acerbic wit and poetic voice of Ian Hunter, Ray Davies, or Paul Weller. Every song was like a short story, and I had darn near as much fun reading the lyrics sheet as I did listening to the record. Deep Six Holiday, almost cinematic in scope, is full of songs about the bitter realities of responsible adulthood and the inglorious struggles of a working musician. Straight up, the record has soul. I could listen to "Shakespeare Couldn't Help" or "Say Goodnight" a thousand times. Hell, I probably have! And what a band! Graham Mills was an absolute star on lead guitar, while Dave VonHoodlum and Brent Schumacher comprised a propulsive & highly underrated rhythm section. If you go to iTunes and look up Deep Six Holiday, you'll find a single review stating, "I've been into punk music all my life, and this is the best band I've heard since The Undertones". Now there is a guy who knows his stuff!

I was fortunate enough to see the Dead End Cruisers a couple times on tour, and their live show absolutely blew away their records. And what a great bunch of dudes! I've said this about a lot of bands, but in the case of the Cruisers it was especially true: they should have been huge! Another fine LP, The Patron Saints of Wheless Lane, was released on Unity Squad Records in 2000 to little fanfare. If you see it around, it's totally worth getting ("NyQuil Sweats" and "First Kisses" are two of the band's best songs, in my opinion). It was, sadly, the last recording the Cruisers did before splitting. Curran, Mills, and Schumacher briefly re-grouped as The Score in the mid-to-late 2000s. You probably never heard them, so check them out here! They, too, should have been huge.

Email ThisBlogThis!Share to TwitterShare to FacebookShare to Pinterest
Labels: '77 Punk, Hall of Fame

I love this band, one of my favorite TKO artists along with Beltones and Shock Nagasaki. I watch the live footage on youtube from time to time, it's a live set in Austin. I'd recommend watching it to those who haven't seen it. Man I love this band thanks for the write up, great read!