Justine and the Unclean - Heartaches and Hot Problems 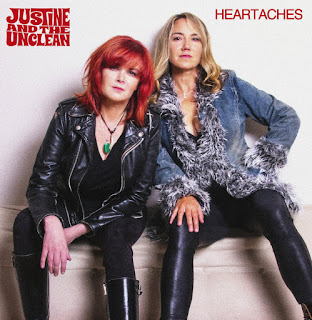 Alright, there's just no questioning it now. I don't have a top ten list of current favorite bands. But if I did have one, Justine and the Unclean would be on it! It was exactly one year ago that I reviewed the Boston foursome's fantastic debut album Get Unclean. Now the group is already back with its second release, Heartaches and Hot Problems. It's out on the eternally dependable Rum Bar Records. If there's any justice in the world, Malibu Lou will be so besieged with demand for this release that he'll have to contract with Santa Claus for help with distribution. One great release could have been a fluke. Two great releases cements Justine Covault's place in the upper echelon of present-day songwriters.

Recapping from previous reviews: Justine Covault (Malachite, Grand Theft Auto, Quest For Tuna) is on guitar and vocals. Her Malachite partner-in-crime Janet Egan King (also of Heidi, Swank, and Tulips) is on bass. Charles Hansen (Rock Bottom, Tom Baker & the Snakes, Gymnasium, The Handymen) is on lead guitar. The legendary Jim Janota (Upper Crust, The Bags, Rock Bottom) is on drums. With a star-studded lineup like that, it's no wonder that Heartaches and Hot Problems crackles with arena-ready rock power. While Get Unclean positioned JatC as up and coming powerpop/punk standouts, this mini-album broadens the band's appeal in a big way. If you still crave more of what worked so well last time, "Heartache Knows Your Name" and "Be Your Own Reason" will satisfy you completely. You just won't hear punky power pop done better. But also on the menu, you'll find big, hooky rock ("This System Is Set To Self-Destruct"); mature, sophisticated power pop ("Monosyllabic Man"); a Joan Jett inspired mid-tempo rocker ("Margaritas and Secondhand Smoke"); and even a legitimately good ballad ("Love Doesn't Know A Thing"). At a lean six tracks, this release adheres fully to the "all killer, no filler" approach. "Heartache Knows Your Name" and "Be Your Own Reason" may be the obvious hits upon first listen, but it's growers like "Monosyllabic Man" and "Margaritas and Secondhand Smoke" that really make this album for me. As I've played Heartaches and Hot Problems over and over, those are the two songs that have really stuck with me. Some of that is the cleverness/humor of Covault's lyrics, and some of it is simply great hooks. Overall, Covault really shines as a lyricist. The subject of love and relationships is one of the defining themes of the human experience, and she writes about these things from a unique and relatable perspective. In the hands of a lesser artist, a song called "Monosyllabic Man" would probably be mean-spirited. Coming from Justine Covault, it's anything but.

With Dave Minehan again at the producing helm, Justine and the Unclean have delivered a sophomore release stacked with songs that ought to be all over rock radio - if such a thing still existed. Anyone into rock, pop/punk, power pop, or just great songwriting in general ought to be delighted to find a copy of Heartaches and Hot Problems under the Christmas tree. At just six tracks, it will leave you wanting more. But isn't that the whole point?!