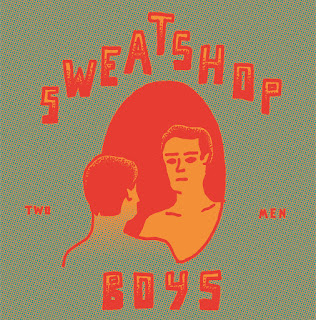 I last reviewed Israel's Sweatshop Boys way back in 2015 when their outstanding EP Always Polite, Never Happy had recently come out. I have to say that that particular release has held up really well over the last three years plus. When it comes to today's powerpop/punk/garage bands, Sweatshop Boys are up there with the best of 'em. So I am more than pleased that the band has finally released its second album - the long-awaited follow-up to 2013's The Great Depression. It's called Two Men, and the band describes it as "an existentialist day dream for all those who stare at the abyss and spit right into it". If you think that sounds like some pretty heavy stuff, I'd say you're right! But what I enjoy about this album is that it tackles serious philosophical questions of existence (Is life devoid of meaning? Are we all completely alone?) using music that's totally upbeat and catchy. Rather than using fun tunes to escape the problems of life, Sweatshop Boys uses them to confront them! As the band says, these songs won't make your problems go away. But at least you'll feel less alone. Isn't there something tremendously comforting in knowing that when you have troubling thoughts about your very existence, someone else is thinking those exact same things?!

Musically, Two Men recalls a time when powerpop/punk/garage hybrids like Marked Men, Steve Adamyk Band, and Sonic Avenues were ruling the punk underground. With that musical style no longer as commonplace as it was in the early part of the decade, it's nice to hear Sweatshop Boys carry it off so well. These guys know how to write a punchy punk tune with melody, and collectively they form one of the tightest units out there. Two Men delivers energy and hooks in abundance, but "lightweight" is the last word you could ever use to describe any of these 12 tracks. You might think "Distractions" is just another power pop love song, but dig deeper and you'll find it's really about something else entirely. Elsewhere the band searches for answers to the great existential questions, sometimes pondering the pointlessness of it all ("Vertigo", "A Terminal") and sometimes finding solace in Beach Boys records or unfulfilling sexual conquests ("Brian"; "Too Young").

As you would expect with five years between albums, Two Men finds Sweatshop Boys taking a big leap forward. Yet it's still tremendously satisfying purely as a powerpop/punk record. If you choose to pay close attention to the lyrics (hint: you should!), you can enjoy this release on a whole other level. I love that these songs are extremely profound yet often quite witty/humorous. This is the soundtrack to your latest existential crisis, and somehow it turns out to be a blast!