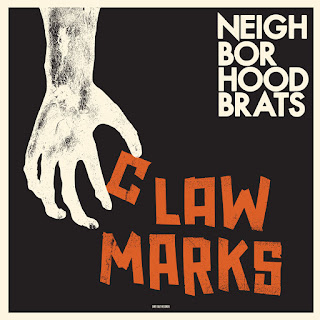 If I had polled you all at the beginning of the year on which 2018 album release you were most looking forward to, there's a good chance that Neighborhood Brats' Claw Marks would have been the #1 choice. After waiting four long years for a follow-up to the band's brilliant 2014 debut LP Recovery, a lot of us were super-stoked about Claw Marks finally coming out. Well now it's out, and my cliched response would have been to say that it does not disappoint. But the hell with that! Claw Marks does far more than not disappoint. It's even better than I thought it would be! If I were stating my case for Neighborhood Brats being one of our greatest present-day punk bands, this album would be exhibit A!

Out on Dirt Cult Records, Claw Marks is a great example of a punk band building off of its core sound. It's immediately recognizable as a Neighborhood Brats record, yet it displays songwriting chops far beyond what Jenny and George would have been capable of a few years back. There are still plenty of nods to late '70s/early '80s California punk, but this album also incorporates a heavy Aussie punk influence along with the dark melodic sensibilities often associated with "modern" punk rock. As always, Jenny's impassioned vocals are perfectly in sync with the sheer power of the band's music. Digging deep into these songs, you'll find tremendous meaning in what Jenny is singing. Sometimes her lyrics are topical/political; other times, they are intensely personal. Put it all together, and you really do have a soundtrack album for the real-life dystopia that is 2018 America ("Late Stage Capitalism" just might be THE protest song for our times). From the furious, vintage Neighborhood Brats banger "Misery Parade" to the thumping, Aussie-inspired "Dumpster Values" to the made-for-singing-along anthem "Down 3rd" to the pitch-black apocalyptic pop of "Touching The Void", this album is full of memorable songs in a wide variety of styles. The inclusion of "Night Shift" and "Comfort Women" from the band's most recent EP was a smart choice; those songs fit the sound and tone of the album so perfectly that it would have seemed wrong to leave them out.

Speaking of that aforementioned EP: Night Shift was the first new music from Neighborhood Brats in nearly four years, and it quickly showed that a long hiatus had not diminished the band in the least. On the strength of that EP, I expected Claw Marks to be something special. And that's exactly what it is. If you long for the days when punk music meant something, I'd urge you to check out Neighborhood Brats and discover that it means more than ever.