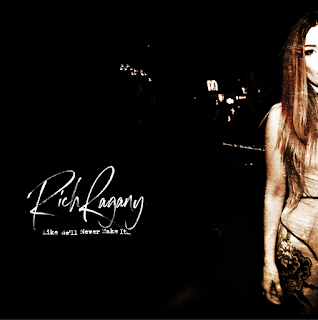 I've been saying for years that Rich Rags is one of our greatest living songwriters, and he sure is making me sound less crazy with every new release. ...Like We'll Never Make It, his solo debut, ought to be the album that lands him on the covers of magazines and onto the mainstream pop charts. He has really outdone himself with this release - which is being hailed as his "singer/songwriter" album but is actually a logical progression from Role Models' brilliant third LP Dance Moves. Rags has grown from a great punk rock and power pop songwriter to a great songwriter, period.

For this solo endeavor, Rags assembled a backing band so superb that they have since become a permanent entity called Rich Ragany and The Digressions. Gaff (Glitterati and Dedwardians) is on guitar and served as Rags' right hand in the creation of this album. Also on board are Ricky McGuire (UK Subs, The Men They Couldn't Hang) on bass, the incomparable Kris Rodgers on keyboards, longtime Role Models producer Andy Brook on piano, Kit Swing (Mallory Knox) on backing vocals, and Role Models' own Simon Maxwell on drums. While we may often dread our favorite artists' ascent into "maturity", that's exactly what I've been waiting for in Rags' case. He has too much to offer the world to be eternally pigeonholed as a power pop guy. ...Like We'll Never Make It is the work of a masterful songwriter who has come fully into his own. The story he's telling is his own, but in a way it's all of ours as well. This is an album about what it really means to be alive. In particular it celebrates the mistakes and missteps that are so crucial to a life fully lived. The album title is a reference to leaving regrets behind and always moving forward in life. Who can't relate to that? What's so immediately striking about this album is Gaff's jangly and absolutely beautiful guitar tone. It's perhaps the one element that distinguishes ...Like We'll Never Make It from a Role Models album. It lends the album a warm, soothing feel that meshes marvelously with Rags' earthy everyman vocals and straight-from-the-heart songwriting. And while the album does have Rags' name on it, a lot of these songs would not be what they are without the contributions of his band mates. Kris Rodgers on keyboards has a long history of making great songs even better, and you'll hear that here for sure. And if you doubt the importance of a backing vocalist in a band, listen to the impact Kit Swing has on "Your Distance" and "Later Than It Is".

Considering that Rich Rags is a Canadian living in London, perhaps "Americana" is not the best label to apply to his debut solo album. But on this release, he definitely takes a seat next to great American alt-rock songwriters like Paul Westerberg, Dave Pirner, and John Easdale (vocally, he resembles the latter two quite a bit). ...Like We'll Never Make It is the perfect album to play while you're sitting quietly on a Sunday morning and reflecting on your own triumphs and failures. If that makes it "dad rock", well then this ought to be the gold standard of the genre! Of the album's ten tracks, all feel like essential pieces. "That World" is vintage Rags and will appeal immediately to longtime fans. "Your Distance" stuns with beautiful simplicity. "Like We'll Never Make It" is the life-affirming anthem you'd expect from one of the album's pivotal tracks (hopefully Mike Mills doesn't hear that chorus and decide to file suit!). "Lose With Me", the album's other pivotal track, is a gorgeous country ballad that leaves us with the crucial words "I've never felt more alive". Elsewhere Rags turns to Faces/Mott barroom boogie on "Scotty Thompson", exquisite mature pop on "Heart's Souvenir", and stripped-down acoustic soul-bearing on the brilliant closer "Easy". It's always tremendously satisfying to get to the final track of an album and discover that an artist has saved the best for last. "Easy" is the song on this release that has stuck with me the most, and I keep going back to it to soak in every word. Rich Rags just may have written his own "Here Comes A Regular"!

Coming off of three Role Models albums in three years, Rich Rags could have been excused for taking a break from this whole making records thing. But let's all be thankful that he didn't! Once again working with the PledgeMusic platform, Rags was able to fund, record, and release this remarkable album. And in typical Rags fashion, I believe he's already working on songs for his next album with The Digressions! Let's enjoy this one for now. In a just world, Rags would achieve worldwide popularity to rival Ryan Adams - or better yet, Bryan Adams.