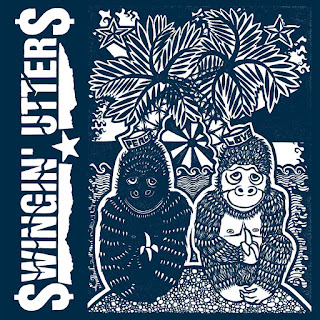 The calendar tells me that Swingin' Utters have been a band for thirty years and have been releasing albums for a quarter-century. Considering all of that, it's nice knowing that these guys are still at it. At 47, I can fondly recall buying Streets of San Francisco new as a young whippersnapper of 24. It's like Swingin' Utters have grown up with me. But far from merely existing in middle age, the Utters are positively thriving. The band's new album Peace and Love was released by Fat Wreck Chords two weeks ago. I can genuinely say it's one of the best punk albums I've heard in 2018, and I might even rank it in the top five of all Swingin' Utters LPs. With this album, Johnny, Darius, and Jack have practically written the book on how a veteran punk group can mature and still sound, uh...punk! Inspired by the current state of political affairs and energized by a formidable new rhythm section (Tony Teixeira and Luke Ray from Cobra Skulls & Sciatic Nerve), the band sounds full of fire on this 15-song release. This is really the first time the Utters have addressed political issues in their music, and the urgency fueling songs such as "Human Potential" and "Deranged" is palpable. Lead track "Undertaker, Undertake" sounds like it could have come off of 1998's Five Lessons Learned. Similarly, "Drinkist" brings that classic Utters sound which has been often imitated and never duplicated. But truthfully, what makes this album shine is the way so many of these songs incorporate new or unexpected influences. "Sirens" is the Utters at their most "pop", with a distinctly modern feel. On the other hand, "Dubstep" and "Yes, I Hope He Dies" are the band's punkest, most fiery tracks in decades. The instant anthem "Demons of Springtime" demonstrates the mastery level of melody and song-crafting that the Utters have achieved over the years.

Even in their early days, Swingin' Utters were far more than the '77 punk/"street punk" revivalists that reviewers pegged them to be. Their musical and lyrical depths were generally under-recognized, and people going back to those old records may be surprised by how well they hold up. If you've passed on recent Utters releases because you assumed they would suck, now might be a good time to check in on one of our greatest American punk groups. I've never really bought into the cliche that recent political events are going to inspire some great new wave of political punk bands. But in the case of Swingin' Utters, it's hard to deny that a newfound political purpose has sparked some of their strongest music in years. Peace and Love indeed!