New music (and new tour) from Dany Laj and the Looks! 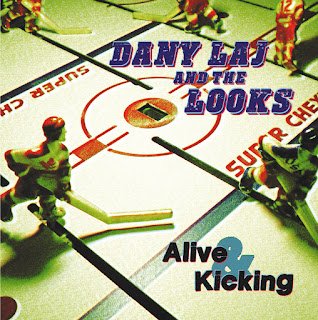 We never go very long without a great new release coming out of Montreal, and the latest is the new album from Dany Laj and The Looks. Alive & Kicking is the band's fourth release overall and second LP following 2015's Word On the Street. It arrives on the eve of a huge North American tour that should be of great interest to power pop fans in Canada and the States. I dug Laj's voice from the first time I heard it. He's the kind of singer that you just can't help rooting for, and I appreciate how he combines power pop hooks with the lyrical depth of a singer/songwriter. He's backed by a top-notch rhythm section in Jeanette Dowling and Colin Burnett. Alive & Kicking tells the story of a small town kid from Kirkland Lake, Ontario making his way to the big city and forging a life of touring and creating music. The band bio refers to his lyrics as "powerful yet unpretentious", and I must say I totally agree!

While certainly based in the hooks and the sensibilities of power pop, Alive & Kicking is an album representing many different moods and musical styles. The 1-2 punch opening this record is as impressive as any I've heard in a while. "Mister Screaming Attitude" is a driving, earnest number that brings to mind Tim/Pleased To Meet Me era Replacements. It's just so easy for me to close my eyes and feel the cold wind of a winter's day in Montreal. "Sweet Pretender" is a bigger hit than even Alexei Emelin could deliver - a radio-worthy pop/rock number that really benefits from Patrick Bennett's excellent keyboard work. It was a logical choice for a single. But don't sleep on the deeper cuts - which serve to bring variety to the album. The rocker "Planet Fun" works the groovy side of Big Star, while "Mixing A Drink" conjures the breezy pop feel of sunny California in the '70s. In a good way, "Diamond In The Rough" sounds like something I would have heard on an "alternative" radio station 20 years ago. And the band really gets to show off its chops on "Defending Champion" - a somewhat dramatic rock epic that genuinely succeeds. It sounds like it should be playing in a critical scene in a triumphant sports movie.

Alive & Kicking is a fine example of quality pop that doesn't limit itself to conventions of genre. Laj is a talented gentleman, and he has a gift for crafting songs that are relatable to almost anyone. In support of the album and the "Sweet Pretender" single, Laj and his band will embark on a long tour next week that is slated to last at least into April. Full tour dates can be found on the band's web site.  Alive & Kicking releases this Friday on CD and digital download on Some Call It Pop Records. Record Centre Records will release the album on LP in the spring!