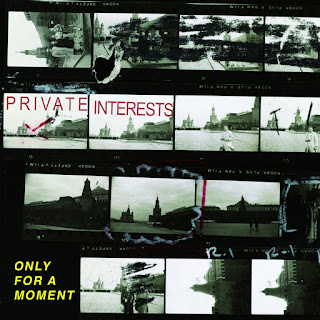 I've been quiet for a while, but I've got something really great for you today! Private Interests certainly qualify as a Twin Cities power pop super group. You may know Johnny Eggerman as the lead singer of the fantastic Mystery Date - a band I've reviewed three times for F & L. He's one of the finest and most overlooked songwriting talents of today's power pop scene, and now he has joined forces with Cam Soojian from Thee Rugs. The idea was to start a band influenced by '70s powerpop/punk/mod (Jam, Buzzcocks, etc.) with Thin Lizzy-esque harmonized guitars. Sounds like something I'd be totally into, right? Heck, yeah! Also featuring the talents of Damien Tank and Trevor Engelbrektson (lifelong pals who comprise the rhythm section of Minneapolis soul standouts Southside Desire), Private Interests formed last year and are releasing a terrific debut cassette today called Only for a Moment. With so many of these individuals having contributed to an original and exciting new wave/mod revival scene in Minneapolis/St. Paul in recent years (Tank is the co-founder of Piñata Records), it's hardly a surprise that Private Interests are in a similar vein. Eggerman's contributions to this EP do bring to mind his work with Mystery Date, but there's something really cool about having two creative forces driving this particular band. The band bio nicely sums up this effect by citing the balance between Eggerman's "Cold-War narratives and anxiously romantic lyrics" and Soojian's "pure loud-fast pop contributions". Add in Tank and Engelbrektson's well-honed R & B chops, and you've got a band that no mod-punk fan should dare miss!

The songs contained on Only for a Moment are the first six tunes that Private Interests worked on together after forming last year, and they were recorded live with Eliot Gordon at his all-analog studio in Minneapolis. Thus the excitement and energy of a new band coming together totally shines through, while at the same time the songwriting comes across as nuanced and fully realized. If you're already familiar with Mystery Date and Thee Rugs, you'll find that Private Interests retain the best elements of both bands while further establishing an identity of their own. That kick-n-the-tail rhythm section doesn't hurt either! I'm struck by how perfectly Soojian's melodic lead guitar style suits Eggerman's songs - as if these two were destined to work together. And their harmonized guitar work totally hits that late '70s/early '80s new wave sweet spot.

Private Interests have a way of reminding me of some of my favorite bands from my favorite era of music without falling into the category of copyists. They take the sounds of my youth and genuinely make them new. Seriously: when was the last time you heard of a power pop band citing mid-20th Century Russian literature as an influence? With the Cold War itself seemingly primed for a comeback, this just might be the perfect band for the moment! Only for a Moment is looking like a strong contender for best EP of the year. Cassette is out now on Forged Artifacts, and you can get a digital copy via Bandcamp for just four bucks!