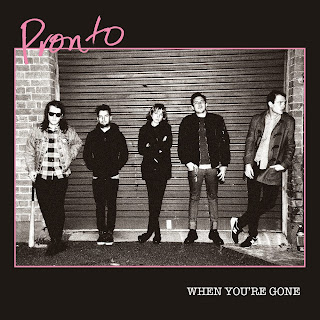 It seems like one of my annual rituals for the month of January is to post on an album from the previous year that probably would have made my year-end top ten if I'd only heard it on time. And even as stacked as my 2014 top ten turned out to be, the debut album from Pronto would surely have cracked the list or at least earned an honorable mention. Given that it's totally up my alley, I'm somewhat embarrassed that I did not get hip to When You're Gone far sooner than I did. I became aware of the album very late in the year and just didn't have the time to give it multiple spins until the clock had run out on 2014. But when it comes to discovering great music, it's never too late. So I'm kicking off a new year on a strong note!

Pronto is a Melbourne punk group made up of members of Gentlemen, Chook Race, Chugga and the Fuckheads, School Damage, and Drug Sweat. The band set out to be a classic power pop group a la Milk 'N' Cookies or The Quick but quickly realized that its talents were more suited for straight-up punk rock. And that turned out to be a stroke of good fortune - because Pronto has captured a sound that's unlike any other band's. These guys take '70s pop/punk and power pop influences and infuse them into a raw and aggressive punk style that brings to mind Killed By Death comps and the best of '90s garage-punk. If you normally pass on today's powerpop/punk stuff because it's too clean or lacking balls, When You're Gone will be music to your ears - literally! I know they aren't stated influences, but I can't help being reminded of the first Damned and Clash albums. There's such rawness and explosive energy to the music, but with genuinely great tunes. And I love the idea of a band trying to write pop songs but playing them like punk songs. Pronto thrashes through these 11 tracks with wild abandon, and you're gonna love every minute of it!

When You're Gone pulls you in with two of its poppiest tracks. "Cry" is rambunctious, catchy, and perfectly placed as an album opener. With its its chugging tempo and shout-along backing vocals, "Sick Of You" is an absolute blast. But once you get to "Daddy", it's obvious that Pronto is no power pop group. And that's when this record really hits its stride! Jack might not sing "pretty", but he can scream and shout with the best of 'em. And Pronto is really in its element playing furious, fist-pumping numbers like "Shut Up" and "Soldier". Even when the songwriting is overtly melodic ("Call You Up"), you get the sense that anyone could learn how to play this music. And that's the beauty of Pronto. They play punk rock the way it was meant to sound - simple, exciting, and fantastically primitive. Without even trying, Pronto has essentially made a classic 1977 punk record. Blast it at max volume while you jump around like a maniac!