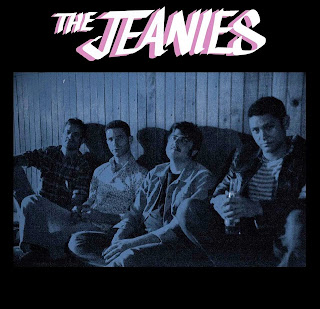 Being someone who loves power pop, I was completely in my glory in 2014. I can't remember a better year for power pop in my adult life, and it was finished off in style by a wonderful debut album from The Jeanies. Released December 19th on King Pizza Records, the Brooklyn band's self-titled cassette recalls a particular strain of classic power pop that's very close to my heart. A la Dwight Twilley, Shoes, Phil Seymour, and 20/20, The Jeanies favor minimalist production and timeless songwriting inspired by the ringing melodies and romantic sensibilities of  '60s pop. In a modern context, a lot of people might hear The Jeanies and call them "garage". And that's perfectly okay with me, because it underscores the fact that this is a rock n' roll band first and foremost. If there's one area where newer power pop bands sometimes falter, it's in not having that rock n' roll foundation. The Jeanies get it right - taking their cues not just from a legendary wave of power pop bands, but also from Brill building pop, '60s soul, the British Invasion, girl groups, and doo-wop. And all the way down to the use of analog cassette equipment, the band's sound is so authentically '70s power pop that it could easily pass for the real McCoy. So, yes, The Jeanies bring to mind all those '60s-inspired power pop bands of the late '70s and early '80s. And if you don't understand why that's a really good thing in 2015, you probably aren't reading this blog in the first place!

What I appreciate about The Jeanies is that they capture not just the sound of classic power pop, but also its spirit. Singer/guitarist Joey Farber is a fine songwriter with a deep affection for an era of rock n' roll that celebrated teenage romance above all else. If you share my mindset that there is nothing better in life than falling in love and nothing worse than breaking up, The Jeanies are a band you will surely "get". Farber is like a modern day Marshall Crenshaw or Tom Petty - a rock n' roll traditionalist with a keen ear for melody. And he's crafted a splendid collection of songs on this excellent debut. Opening tracks "I Seen Her Dance" and "I Think You're The Wrong One" (the best 20/20 song I've heard in decades!) would both be hit singles if 1979 had never ended. But while power pop has always been a singles genre, the best bands always manage to deliver front-to-back strong albums. And that's exactly what The Jeanies have done here. Touching on everything from rootsy rock n' roll ("The Girl's Gonna Go") to Byrds via Petty jangle ("Believe Me Jenny") to doo-wop/girl group harmonics ("That's The One") to '66 Who stylings ("The Kids Are No Good"), this album is like a tour through the history and pre-history of power pop. And it's given such a fresh treatment that it will appeal not just to teenagers at heart, but also to actual teenagers (albeit ones with very good taste).

At some level, this is music built on a nostalgia for a time long passed - when young men still daydreamed of accompanying pretty girls to malt shops and three minute pop songs ruled the radio. But The Jeanies aren't so much attempting to turn back the clock as they are trying to keep a timeless musical form alive. I can't help but be impressed with the quality of the song craftsmanship and the crisp execution of the harmonies. I've been collecting classic power pop records for most of my life, and The Jeanies' first album easily slides in there with the best of 'em.

I love this. Very Twilley / Seymour-ish. Who does that these days??? These guys!!

Nice review. You also nailed something on the head: "If there's one area where newer power pop bands sometimes falter, it's in not having that rock n' roll foundation." EXACTLY. A lot of the new guys seemingly forget that there's supposed to be power in power pop. I don't know how many syrupy, overproduced, Radio Disney wannabes I waded through before I found this (fantastic) album. Glad to hear that someone GETS it.