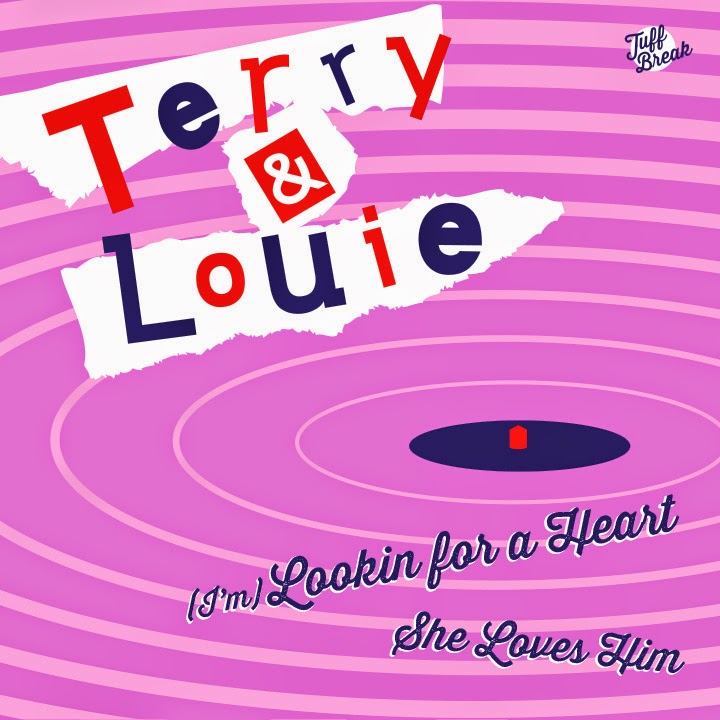 Wow! A longtime musical daydream of mine has finally become a reality! I had always hoped that someday, Terry Six and King Louie would again work together. These are two of my favorite people in music. They're just incredibly talented dudes, and each has a remarkable ear for perfect pop songs. The former's guitar playing and the latter's songwriting were huge parts of what made the Exploding Hearts' Guitar Romantic the greatest album of the 2000s (and, in my opinion, one of the best punk LPs ever made). Terry, more or less retired from music since the Nice Boys disbanded, has made a magnificent return to recording with the help of his old pal Louie. Out on Terry's own label Tuff Break, the debut single from Terry & Louie is a huge treat for any power pop fan. Joining the duo on drums is Garett Goddard (Cuts, King Tuff, Personal & the Pizzas, Girls), and the great Pat Kearns mastered both tracks. The label's description of these two songs is really dead-on. A-side "(I'm) Lookin' For a Heart" hits that Nick Lowe/Eddie and the Hot Rods pub rock sweet spot with hot guitar licks and some gigantic hooks. On the flip, "She Loves Him" is a power pop ballad with the wistful jangle of Phil Seymour meets Road To Ruin era Ramones. I'm usually a pop guy, but in this case the high-energy rock n' roll of the A-side is what really has me hooked. This project is by no means intended to be the second coming of the Exploding Hearts. But listening to "(I'm) Lookin' For a Heart", it's impossible to not be reminded just a little bit of Guitar Romantic.

While Louie was out in Oakland recording with Terry, the pair actually laid down enough tracks for two singles. So this will not be the last we hear of Terry & Louie. And considering that the vinyl for this release was sold out the day it came out, it seems that a lot of people besides me are very excited about this pairing! As a longtime admirer of Terry Six's talents, I'm beyond thrilled that he's writing songs and releasing music again. I was super stoked to hear that he was teaming up with Louie. And now that the record is out, I am in no way disappointed! If you need the vinyl, I believe Bachelor Records still has some copies!