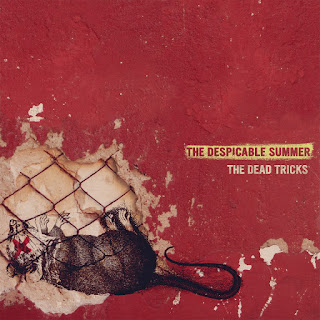 I love it when a band proves me right. When I last spoke of The Dead Tricks, I touted them as the best new punk band of 2011 and the next big thing to come out of New York City. Perhaps that was an awful lot to live up to. But 14 months later, I wouldn't take back a single word. And having heard the band's brand new single, I worry that perhaps I understated how good The Dead Tricks are!

Classic punk rock inspires The Dead Tricks, but it doesn't limit them. And that's exactly the kind of band we need right now. They take the energy and power of "old" punk music and transform it into something fresh, current, and highly unique. And in "The Despicable Summer", they have what should be their breakthrough smash hit. In an interview with the blog Critical Mass, guitarist Lorne Behrman (ex Dimestore Haloes) describes the challenge of trying to top the band's last EP: "After recording that EP I remember walking around at dawn in a daze, sort of distraught, thinking I could never do anything better than that EP. But you can't judge creativity that way. You just dig deep and move forward." Not content to just repeat themselves, The Dead Tricks have taken things to the proverbial next level. And in all honesty, I'm blown away!

Plain and simple, "The Despicable Summer" freakin' rocks. It comes on with massive, high-powered guitars, and the drums hit so hard you'll swear the band's right there in the room with you. But it's the incredible lead vocal from James Donovan that is the real driving force here. In entirely the best way, he sounds absolutely mad. He sings the hell out of this song! In a contemporary punk scene too often devoid of passion and personality, this guy brings both in abundance. And to go with all that fire and fury, he's got the melodic chops to make that catchy chorus really sizzle. This is one of those songs that floors you from the beginning and then stays in your head all day. Behrman and Donovan really upped their game in the songwriting department, and it totally shows. If you like rockin' punk that's heavy on the hooks, "The Despicable Summer" is for you! Plus I love the title. Sounds very literary!

While perhaps less immediately gratifying, B-side "Serf" may be even more impressive in displaying The Dead Tricks' considerable artistry. It combines the band's blistering melodic punk sound with the more desirable elements of "modern" rock, employing moody dynamics and a building intensity that rises to a fever pitch. I love that there's no obvious comparison to make here (although I'm reminded a little of that great new wave of new wave band Compulsion). This is a band defined by its own talents and vision, not by some preconceived notion of what "punk" music should sound like. Again, Donovan sings like he's exorcising demons. And behind him is a band with hot chops and undeniable chemistry. It's tempting to consider what kind of full-length album this crew might soon deliver, but there's something to be said for the art of the perfect single. You have to admire a band that takes its time and delivers quality. I know it's only January, but "The Despicable Summer" will be hard to beat this year!