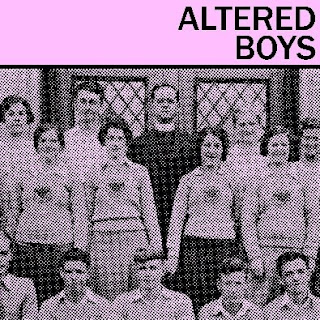 Happy New Year! One of my goals for 2013 is for Faster and Louder to get, uh, faster and louder. I'd like to cover hardcore punk on a more frequent basis. There's just something about hardcore punk that no other style of music can touch. Cranked extra loud, it's like rocket fuel for the soul. It makes a man feel unstoppable. And so we start with Altered Boys out of New Jersey, who tear it up old school on their killer debut 7". Although largely inspired by the Jersey hardcore scene of the early 2000s, these guys play with a power and intensity that will quickly win over oldsters like me who are usually suspect of any "hardcore" record made after 1983. Basically, this record is hardcore at its purest and best. It's fast, furious punk music played with conviction by a tight, red-hot band. All the familiar elements are there. You've got your screaming angry vocals, heavy guitars, racing drums, and thick-ass bass. There are even some cool guitar leads. But Altered Boys are far more than the mere sum of their parts. Their brand of hardcore is downright inspired. Songs like "Reality Check" and "Who Are You?" are perfect to crank at full-blast when you're in a super pissed-off mood or just feel like moshing it up in your bedroom. Powering through seven tracks in less than five minutes, Altered Boys will thrill fans of old Boston hardcore. Get pissed and turn it up!