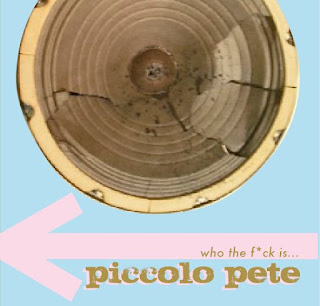 Piccolo Pete, out of Long Beach and Huntington Beach, California, strives to create a “wonderful place where the sound of punk, pop & rock can happily coexist”. If you think that sounds like the kind of band I’d be into, you are, uh, absolutely right! Guitarist Nick Hanick and drummer Paul Sakry (from What Do I Get?) have teamed up with the legendary Jim Kaa to form this newest sensation of So-Cal punk rock. Inspired by the classic punk songwriting of Shelley/Diggle and Strummer/Jones, Piccolo Pete make no secret of their influences. But at the same time, they’re taking these classic sounds and “making them their own” (I know, I know, that’s a rock writer cliché- subtract points accordingly!). Brand new album Who The F*ck Is...Piccolo Pete is available for download on the trio’s Bandcamp page, and I highly recommend that you check it out. It’s awesome…and free!

Typical of a band comprised of punk rock veterans, Piccolo Pete exhibits tremendous musicianship. So while a lot of today’s bands in the Buzzcocks/Jam mold come on in a caffeinated frenzy, these guys leave their music more room to breathe. Their style is “mature” in the best sense of the term. Think more A Different Kind of Tension than Spiral Scratch. The songs are well-crafted, lyrically witty, and full of instrumental breaks emphasizing the interplay between guitar and bass. As a musical unit, these three are as tight and crisp as it comes. They’ve got the harmonies and guitar sound of vintage Buzzcocks down to a T. There’s even a bit of a Shelley/Diggle type thing going on with the lead vocals. And Kaa, best known for his guitar work in The Crowd, is an absolutely sick bass player. While a couple songs like the terrific “You’re Never Near” are snappy pop/punk by the book, the best tracks are less hurried and a little more sophisticated. A couple really stand out. “Seen One, Seen Them All” cleverly finds parallels between our manufactured culture and one man’s female troubles, while “As the Summer Fades” is a touching recollection of childhood fun in the pre-Internet age. Truthfully, there’s not a bad song in the bunch. These guys can do anything from 100 percent pure pop (“Above the Water”) to balls-out rockin’ punk (“New New Girlfriend”). Even the covers (Buzzcocks’ “Walking Distance” and The Jam’s “All Mod Cons”) are keepers.

I love it that Piccolo Pete is so excited about its new record that it just wants to people to hear it free of charge. I’m thinking that a lot of individuals will like it so much that they will end up paying for a hard copy. Of course I’ve always been a sucker for this particular sub-genre of punk. But truthfully I’ve never heard a band play it quite like Piccolo Pete does. As musicians and songwriters, these guys are a cut above. Among the ever-growing list of top ten worthy albums of 2012, here’s one that will be very hard to deny.