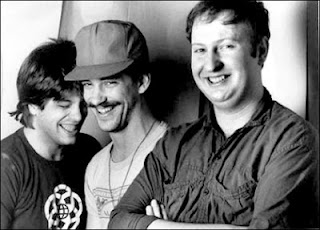 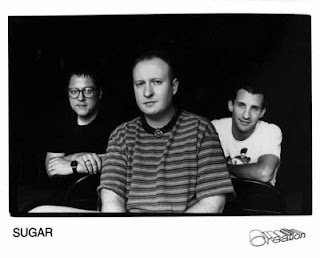 This debate started on Mike Frame's Facebook wall. Mike wondered if he's the only person who likes Sugar better than Husker Du. This got me to thinking. I love Sugar. They were one of the best and most underrated bands of their time. But I've always considered Husker Du one of the two or three greatest bands of the entire 1980s. Moreover, Husker Du is my third favorite band of all-time, trailing only The Clash and AC/DC. Could Sugar possibly be better?

When I really break it down, it's a closer call than it seems. For starters, in Sugar's favor the sound quality of their recordings is far superior. Husker Du, as great as they were, suffered from some lackluster production on record (especially their Warner Brothers releases, with that awful mid-'80s tinny drum sound). And if we're comparing rhythm sections, Sugar wins that one going away. And probably, if I had to name the single best album that Bob Mould has ever played on, I'd go with Sugar's Copper Blue. My favorite Bob Mould song? "If I Can't Change Your Mind".

But then we turn to some points in favor of Husker Du. There was a point in my life when I never imagined I'd say this, but here goes: Husker Du is better than Sugar because Sugar didn't have Grant Hart. I'm not talking about his drumming. I'm talking about his songs. Husker Du would not have been the same without songs like "Turn On the News", "Books About UFOs", "Diane", "Pink Turns To Blue", and "It's Not Funny Anymore". I'm still more of a Mould fan, but I like the yin/yang effect that Hart brought to the group. And if Copper Blue is the single best Bob Mould record, the rest of my top five would all be Husker Du titles: Zen Arcade, New Day Rising, Metal Circus, Everything Falls Apart. And if Metal Circus doesn't count, Flip Your Whig is next. The gist of Mike's argument was that Sugar in general had a higher percentage of A-grade material versus filler/throwaways. That may be true (except for Beaster, which should have been called Bob Mould Shits On Your Eardrums). But for me, I just can't ignore the sheer volume of incredible Husker Du songs. Perhaps it's not a fair comparison since Sugar only made two proper albums and Husker Du made six or seven. But if I was going to make a compilation of both bands' best 20 songs, I think the Husker collection would be considerably better. Plus I love the variety of Husker Du's body of work - how they started out doing thrash/speed punk, then practically invented melodic hardcore, then became icons of "alternative" rock.

All things considered, I give the edge to Husker Du by a hair (off of Greg Norton's mustache). Who's with me? Who's with Mike? Speak now!

The Du all the way! Sugar is cute, but husker du is serious business!

less "alternative" than the du.

HUSKER DU. My wife prefers The Clash. But if I had to pick a fav band from t entire punk/new wave/alternative/post punk era, Id give it to t Huskers. No one kicked more ass. No one did songs about anger better. And no band made me cry like Husker du.

Tho theres nothing at all wrong w Sugar.

Sugar without question for me. I've tried Husker Du numerous times over the years, but apart from a couple of songs, I haven't enjoyed them anywhere near as much as Sugar.

When I clicked to this blog post from Google, I thought "Faster and Louder" was going to be a reference to Husker Du over Sugar.

Bob Mould's newest album (Patch the Sky) is almost one half Sugar and one half Husker Du, so although it's a good album, I don't like it as much as some of Bob Mould's other recent (or early) solo albums, which seem to be more on the Sugar side.

I finally got around to seeing Bob live about 3 years ago, and him and his band were very good (and very loud).