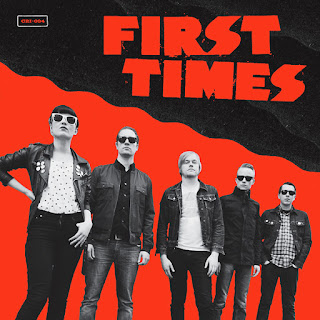 You think Finnish punk, and probably Hanoi Rocks and Smack come to mind. What you don't think of is female-fronted punky powerpop a la Nikki and the Corvettes. But maybe that's about to change. Take away the Euro-accent in the vocals, and you might think Helsinki's First Times were from sunny California or the American Midwest! Seriously, "(I Don't Wanna) Party No More" sounds like something Bomp! Records would have released in 1980! And you damn well know that's my cup of tea! Wow, man, where did this band come from? Well, actually, I know where they came from: Finland. Is this the new Finnish sound? If so, I might have to move there! I've been searching for my ultimate summer record of 2012, and I do believe I've found it. First Times have posted two tracks from their forthcoming EP on their Bandcamp page for your listening pleasure. And I do mean pleasure. With its revved-up Chuck Berry backbeat, mega-catchy chorus, and spunky lead vocal, "(I Don't Wanna) Party No More" is the epitome of summertime fun! It's a stone cold hit. Dig, kids: this is gonna be your favorite song of the summer! And then you have "Girl On the Run", a hook-laden tale of heartbreak in the vein of the Paul Collins Beat. Nice! This, my friends, is what one calls a "teaser". You're gonna hear these two songs, and then you're gonna want the record. You'll get the record, and then you're gonna want a t-shirt, a tattoo, a cassette tape of all their demos, and the bobblehead doll collection! Yes, sir. First Times fever is upon us! This is my favorite new band of 2012 - and perhaps yours too!