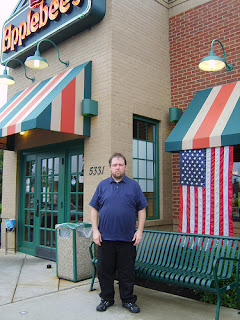 The Last American, at its most basic plot level, is a story about a guy who pukes at Applebee’s. On premise alone, that makes it a short story everyone should want to read. But there’s so much more to The Last American than just premise. It’s a tour de force of superb storytelling, deliciously descriptive writing, spot-on symbolism, and scathing satire of everything that went terribly wrong with our nation after 9/11. I have spent my entire adult life believing that Good Country People by Flannery O’Connor is the greatest short story ever written. I may now need to reconsider this opinion.

I first came to know Shawn Abnoxious sometime in the mid-to-late ‘90s when he and I were both churning out text-dominant fanzines that dared readers to, uh, read. This was a time when most zines were all about the graphics and layout. I sensed a kindred spirit in this fellow from , and more importantly I noticed that he was simply a damn good writer. Great writers are born, not made. And this guy had it! Over the years, Shawn would go on to fulfill his writing talent by penning dozens if not hundreds of brilliant poems. He published a number of poetry chapbooks that I highly recommend. And now, in the year 2011, he has finally tackled my favorite genre of literature: the fiction short story. As far as I know, this is the first short story he’s ever written. Clearly, he’s a natural.

As a reviewer, it’s tricky to talk about a piece of fiction because you don’t want to give too much away. The Last American is full of so many pleasant surprises, vivid images, memorable characters, and quotable lines that it would be sinful to reveal any of the particulars. But having lived through that very strange freedom fries/shock and awe/riot Act period of our nation’s history, I can at least tell you that The Last American hits the nail straight on the head. For a story that’s uproariously funny from the get-go, this is a tale that has a lot of insightful things to say about our nation in general and the military/industrial/entertainment complex in particular. Dwight D. Eisenhower is surely looking down and nodding in firm approval. And in typical Shawn Abnoxious fashion, the structure of this story is quite creative. There are two preludes, an epilogue, and a bonus question that’s worth up to ten points. Should you doubt that a 6,000-word story about a man vomiting is something of high literary merit, let me just say that the descriptive account of the puking act is some of the most extraordinary prose I’ve ever read. And the ending? It’s the stuff of legends.

The Last American is available as a free download e-book. I implore you to read it! Click here for more information! You’ll never think of Applebee’s the same way again.

Email ThisBlogThis!Share to TwitterShare to FacebookShare to Pinterest
Labels: Ohio

Wow. Thank you for your continued support Josh. I cant believe that THE LAST AMERICAN comes close to GOOD COUNTRY PEOP!E in your opinion, but im not going to argue the point.

I was thinking, Im fine with being second... or even third...

We'll let ole' Flannery hold on to the top spot, but THE LAST AMERICAN is very much in the conversation. THE TELL-TALE HEART rounds out the top three.

Poe! That is a good one. I would like to write something that could be a mix between Poe and Shakesphere... title it THE FALLING BOTTOM OF THE WELL?