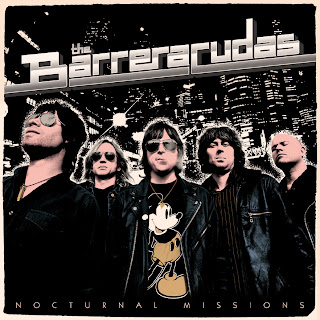 Aw shit, here we go again. I thought album of the year was a mortal lock. I wasn’t losing any more sleep over potentially excruciating decisions. I could concentrate on other things like deciding between Dave’s Hot ‘N Juicy and the BK Chef’s Choice. I was able to work on my tennis serve and catch up on reruns of Storage Wars. Something Fierce had earned the title belt, and it was going to be a slam dunk. Well, I still might end up giving it to Something Fierce, but The Barreracudas are making a late push for the big prize and all its accompanying benefits (free Slurpees on Tuesdays, a pot of gold, tickets to the Faster and Louder pancake social 2012). Among these five fellows from Atlanta, a few played with the very great Gentlemen Jesse and his Men (they were, uh, the men). So of course you should expect power pop, and that’s exactly what The Barreracudas deliver. But this isn’t just power pop. It’s some of the best power pop I’ve heard in a long time, mixed in with elements of glammy rock n’ roll to create a sound that’s flat-out HOT! Think Twilley and Seymour. Think Cheap Trick and The Boys. Think Sweet and the Flamin’ Groovies. Yeah, baby, this is the stuff! From the hip-shaking party-starter “Numbers” to the brilliant album-ending cover of “C’mon, C’mon”, the band’s debut long player Nocturnal Missions keeps the hits coming. Whether you prefer the pure power pop bliss of “Baby Baby Baby” and “Girl”, the raunchy rock n’ roll of “Feet”, or the “I can’t believe that’s not a Boys demo!” awesomeness of “Because” and “I Won’t Wait”, there’s much here to love if you’re a punk/powerpop freak like me. I’ve said this about bands before, and I’ll say it about The Barreracudas now: this is a classic “Lord Rutledge” kind of band. You know the kind of music I like, and these guys are most definitely it. This album is chock full of songs that would be hit singles in a perfect world (or could have been hit singles in 1978). Praise Paul Collins! This is what music should be. It’s fun. It’s catchy. It’s energetic and impossible to resist. Nocturnal Missions is one of those albums that you throw on, and instantly it makes your day better. Hey kids, do you like hooks? Of course you do. Five stars!

This is some cool stuff.... but im gettin behind...

Have you ever measured your serve's MPH?

Gonna do a Wendy's versus BK battle?

I will have to recuse myself from any BK postings due to family connections to said franchise. But Wendy's is fair game! Might have to find an entity it can battle...Hardee's, perhaps? Sounds juicy (no pun intended!).

I've got a feeling my tennis serve is of a lesser velocity than that of a 13-year-old girl's. The strength of my game is return of serve. I'm like a fat, bald Jimmy Connors (which makes me Andre Agassi, I think).