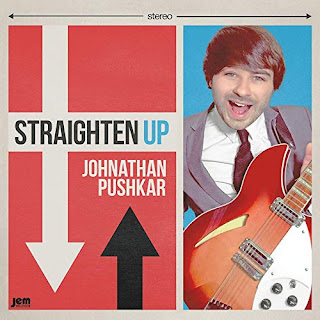 Johnathan Pushkar's debut full-length is like the Wonders album that never was. Produced by Wyatt Funderburk and released by the legendary JEM Records, Straighten Up is ten songs of perfect British Invasion inspired power pop crafted by one of music's brightest young stars. While still only in his early 20s, the Pennsylvania born and bred, now Nashville-based Pushkar has already been playing in bands for a decade. I'm pretty close to theorizing that he wasn't actually born in the '90s but rather sprung out of a time machine that he boarded in 1964. Here he is in 2019, completely unaware that rock and rollers aren't supposed to be wholesome and perpetually smiling. He writes songs as if the past five decades never happened - connecting with that part of all us that's forever 16 and dreaming of true love. It had to be fate that this young man would wind up making a record with the guy who wrote "What If"!

From the opening strains of "The Girl Next Door", Johnathan Pushkar can easily be identified as a '60s pop classicist. And it's not just that unmistakable Rickenbacker tone. His scholarship of power pop music and its roots goes all the way back to Buddy Holly (at least). His affection for the timeless craft of the three-minute pop song comes through in every note he plays and sings. If you love jangly guitars, sweet-sounding melodies, and beautifully-executed harmonies, you'll be hooked by track one. And there's no fall-off from there. "The Girl Next Door" was the album's lead single and has been blowing up the indie charts all summer. But the next two tracks "We Could Be Together" and "Isabella" are smash hits in their own right! Elsewhere, Pushkar proves himself to be an endearing and relatable storyteller on the keyboard-tinged "Boyfriend". "Smile", with its gorgeous melody and pure-hearted sentiment, is an absolute gem of a pop song. "Hackensack" is, of course, a cover of the Fountains of Wayne classic. It would be impossible to improve upon the original, but Pushkar comes darn close to matching it. To pull off this song, you need a voice full of vulnerability and a heart you freely wear on your sleeve. Those qualities shine through again on the album's outstanding closing number "I Can't Help The Way I Feel".

Straighten Up is an album for diehard believers in true love and simple pop tunes (Aren't they one and the same?). Johnathan Pushkar specializes in songs that are hopeful and sweet and life-affirming. Everything he stands for is the perfect antidote to the misery and cynicism that plague our modern world. If you're looking to make a great power pop record, the first thing you ought to do is get Wyatt Funderburk to produce it. Pushkar did just that, and he also enlisted respected musician friends like Sandy Gennaro (Joan Jett, The Monkees), Bill Cinque (Neil Diamond), and Jeff Alan Ross (Badfinger) to play on the record. Call this album "retro" if you want. I prefer to think of it as timeless. Johnathan Pushkar isn't old enough to be nostalgic for the British Invasion, but he's wise enough to know that these sounds ought to be forever revived for new generations. The future of power pop sounds an awful lot like its past, and I could not be happier!