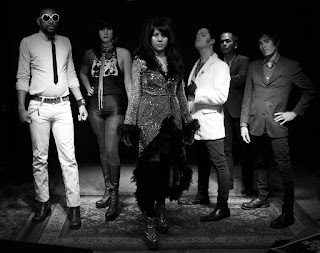 Any band that describes itself as "bubblegum glitter punk" was bound to win me over in a hurry. And with Penny and Shawn from the late, great Dirty Sweets in starring roles, Austin's Lola-Cola was a group I could not wait to hear! Let me tell ya: I was anticipating big things. Dirty Sweets were the shit! Remember their album on Rip Off? But Lola-Cola are even better than I was expecting! Although the look and presentation are very "glam", musically this band has that classic '77 trashy punk rock n' roll sound I can never get enough of. I hear a huge Johnny Thunders influence in the music, and Penny on lead vox brings attitude and charisma in abundance. The band has a 7" out on Ken Rock, and you can stream their four-song cassette on their Bandcamp page (I love it, that in the year 2012, there are still bands doing "tapes"). The "hit", "Tough Love", is an instant classic if there ever was one. Imagine the Heartbreakers fronted by a bad-ass punk rock chick. "You Gotta Mouth On You" is in the same vein, replete with a bouncy bass line and red-hot guitar work. And "A Pair Of Blue Eyes", with its girl group chorus and Chuck Berry-ish solo, brings to mind the mighty New York Dolls. Perhaps four songs is a small sample size. But what a band! Heck, they even have their own theme song! I think every band should have its own theme song! Play the clip below, and you just might find yourself an instant fan. I know I was. L-O-L-A! C-O-L-A!

Tapes are the new cassettes!

Hi, Nice post thanks for sharing. Would you please consider adding a link to my website on your page. Please email me back.